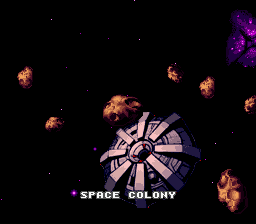 Space Colony Ceres is under attack!

You begin the game with a distress call coming from Space Colony Ceres. As a morally righteous bounty hunter, Samus follows the call and heads to Ceres.

You begin on an elevator platform, and you cannot return to your ship at this time. Simply follow the map to the end (down, right, down the zig zag stairs, past the broken metroid container and the dead scientists, and then into the last room).

When you enter you will see the transportable metroid container sitting near the corner of the room; you may wander around the room at this point or just sit still. After ten to fifteen seconds has passed, a glistening yellow light will appear above the metroid, followed by the appearance of Ridley, who had supposedly been hiding there all along. He will roar and then begin to attack you as he snatches up the metroid (which he holds while fighting). You can simply run into him and take as much damage as possible or you can shoot at Ridley until when he drops the metroid box. You cannot completely kill him even though he takes damage (flashes). When you get down below 30 or so energy or if you keep giving damage to Ridley until he drops the metroid, Ridley will fly into the background and come zipping towards the foreground at full speed; at which point he will exit and cause the self destruct mechanism to begin within the colony. 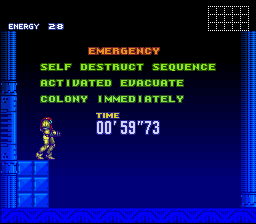 One minute is more than enough time to safely evacuate the space colony.

You now have 60 seconds to escape from the colony before it explodes. Run back through the colony, you will be bombarded with jets of steam and falling debris. They cannot hurt you, so don't worry about completely avoiding them for now. When you get to the zig zag stairs, the colony will begin to rotate a bit within a few seconds of entering the section, making the terrain a bit more difficult; not to mention the jets of steam coming from the walls. Continue up, head to the left and then back up the tall entrance room. This final room can be a little difficult, the jets of steam appear on the edges of each platform so time your jumps accordingly. Also, the room will rotate clockwise several degrees, making it also a little more difficult. Reach the top of the room and step on the glowing elevator platform to escape; it's actually possible to do this in under 30 seconds.

You will watch an animation depicting the colony's explosion, Samus's escape and her flight to the nearby Planet Zebes. For what reason? Perhaps to follow Ridley, perhaps her ship is slightly damaged.