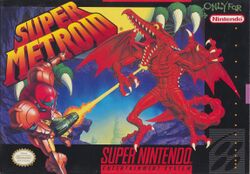 Super Metroid was the third installment in the Metroid franchise and was released on March 19, 1994 for the SNES. The game follows bounty huntress Samus Aran as she travels to Planet Zebes to battle the Space Pirates. The game takes place immediately after the events of Metroid II: Return of Samus. Samus delivers the last infant Metroid to the scientists at Ceres Colony, where they discover that the Metroid’s abilities to drain life energy may be able to be harnessed beneficially.

Soon after leaving the station to seek a new bounty, Samus receives a distress signal. The station is under attack by Space Pirates. Samus finds the dismembered crew, and the last Metroid is in the hands of one of her greatest adversaries, Ridley the space dragon. After a brief battle, Ridley flees and activates the self-destruct sequence. After escaping the exploding space station, Samus makes her way to Zebes, where she will fight the Space Pirates, collect Chozo items, and attempt to re-acquire the Metroid.

"I first battled the Metroids on Planet Zebes. It was there that I foiled the plans of the space pirate leader Mother Brain to use the creatures to attack galactic civalization.

I next fought the Metroids on their homeworld, SR388. I completely eradicated them except for a larva, which after hatching followed me like a confused child.

I personally delivered it to the galactic research station at Ceres so scientists could study its energy producing qualities.

The scientists' findings were astounding! They discovered that the powers of the metroid might be harnassed for the good of civilization!

Satisifed that all was well, I left the station to seek a new bounty to hunt. But, I had hardly gone beyond the asteroid belt when I picked up a distress signal!

Ceres station was under attack!" ~ Samus Aran, of Super Metroid