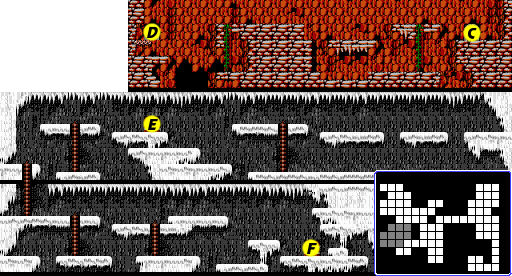 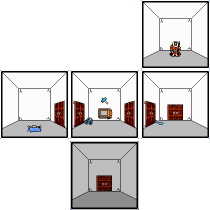 You may have visited through Door F of Freezer A before, but you'll need to return here once again now that you have the diving suit. It is also highly likely that you lost possession of the boomerang while you crossed the bridge in either direction, so this is the perfect opportunity to collect it once again. After you grab the boomerang, return to the left room with the hole in the floor. Go to the item menu, press B once, and select Diving Suit, and off you go into the watery region beneath the hideout.

You will begin your diving adventure on the left side of the back layer of water. You arrive through the door marked S. Just a short distance away from where you start, a secret can be found at the location marked with the green "!". Read the spoiler below to learn what it contains. When you are ready, proceed right until you reach the pipe that leads to the section below. From here, swim back to the left until you reach the first door, Door A.

While there's no indication that there is anything special about this small portioned off section of water, it just so happens that if you drop a bomb in this location, the blast will cause a door to appear. Inside you will find one of the rare and elusive Fish Men that live in the water and secretly support Mikey's efforts to rescue Annie the Mermaid. The Fish Man inside this door will grant you one extra life for your troubles.

Without the Magic Locator Device, which is located elsewhere in the water, you might not suspect that there is anything special about this chamber. All three rooms appear completely empty. If you do a little investigation however, you will learn that this area is not so empty after all, and the Magic Locator Device will inform you that this is the location of a kidnapped Goonie. If you hit the back wall of the center room in which you arrive with your fist, you will find a very important item, the

Ladder. If you've ever seen a hole in the ceiling or the floor of a room, it is the Ladder which enables to you to pass through it. Likewise, if you hit the back wall of the left room with your fist, you will find a third Bomb Box which will expand your bomb capacity to 15. However, punch the back wall of the right room, or even hitting it with your hammer, has no effect. Instead, if you hit the ceiling with the hammer, you will punch a hole through it, which will allow you to use the Ladder which you just collected. If you do, you will climb up to find the kidnapped Goonie which you can rescue to obtain a sixth bar for your health meter.

With the fourth Goonie rescued, you could turn around at this point and go for the fifth, but there's quite a bit of water left to explore, and a useful item to collect, so don't turn back just yet. From Door A, return to the right and swim back up the pipe, and continue on to the right. You will encounter stronger water enemies like the powerful shark or the invincible jellyfish. Do your best to avoid colliding with them, and swim all the way to the right until you reach Door B.

When you arrive from the water through the hole in the ground, you will be in a room with a door to the left. The back wall, however, is worth exploring. If you hit it with your fist, you will obtain a fourth

Keyring which gives you the ability to store up to 8 keys. The left room, however, contains no such secret; just a hole in the ground which leads to the water region of the front layer of the hideout. Don your Diving Suit to hop in.

Other than the color, there is very little that distinguishes the front layer of water from the back layer, except for a surprise appearance of a lobster. When you arrive through door B, you will see a pipe immediately ahead of you. Swim down this pipe, and back to the left to arrive at Door C.

The right room in which you arrive contains nothing special. A trip to the left room will reveal the location of a Fish Man. He has an item which he happened to remove from Data's possessions. After investigating it, however, he has concluded that he has no use for them and would like to give them to you. They are the

Jump Shoes. They won't help you at all in the water, but when you return to the surface, you can put them on to give your jumping ability a substantial boost. Don't forget to try them on!

There's just one other door and it's a bit of a trip to get there. It's on the far right side of the front water region, and in all honesty, is not really worth the effort it takes to get there. If you decide to explore it, you will pass a pipe which leads down to a lower section of water. This pipe in turn leads to another pipe further below. Taking the second pipe will drop you off in a bottomless section of water which you should not dare to drop too deeply into. The only thing worth noting about this area, is the scenary to the right which indicates that there are some doors you will eventually explore, but cannot access at this time. Swimming back up through the pipes and continuing your journey to the right, you will eventually reach Door D

For all your effort to make it to this final door, you will find nothing more than a hint safe, which you must use a precious key to open in order to learn its secrets. Highlight the space between the parentheses to learn what it says (BE CAREFUL! SOME DOORS'LL APPEAR BY EXPLOSION.) While a somewhat useful hint, it doesn't give you any idea where to look.

With every door in the water explored, it's time to return to the Freezer and make your way to the access point for the fifth Goonie. This happens to be very close to the location where you rescued the first Goonie from. To get back there, return to the Red Cavern from the Freezer, and take the lower middle door back to the gray basement in the front layer. Climb up to the section above, and take the door to the left to return to the basement in the back layer. Climb up the ladder and run to the left to find the Warp Zone which you were previously unable to access.