Back layer of the house[edit] 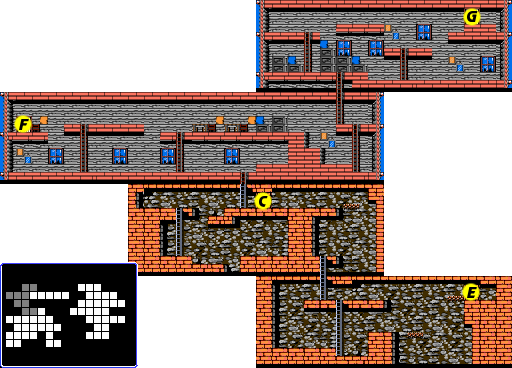 The truth is that there are two ways to arrive at the next location. One involves running all the way back across the bridge (where you will risk losing your boomerang again) and returning to the Purple Cavern so that you can jump up to Door X with your new found Jump Shoes. However, there's a faster and safer method of traveling to this location, and it makes use of your new found Ladder instead. Return to the site where you rescued the first Goonie, and enter Door F.

You should have no difficulties returning to this early portion of the hideout. If you visited Door F on the far left side of the back layer of the house, you will recall that there wasn't much for you to explore. Now that you've obtained the ladder, it's a different story. Crack a hole in the ceiling of the left room with your trusty Hammer, and use the Ladder to climb up to the floor above.

Once you're on the second floor, there are a couple of rooms strung together, but not much of interest. There happens to be an old woman in the back room who lets you know just that; there's nothing of interest. But she does tell you to look for a Transceiver, which you should have already found by this point in the game. In order to actually utilize the warp in this chamber, you must travel down from the room that you arrived in with the Ladder, and travel down one more time. Talk about a warp, this just sent you from the top left corner of the back layer, to the bottom right corner of the front layer. Behold the lava zone. 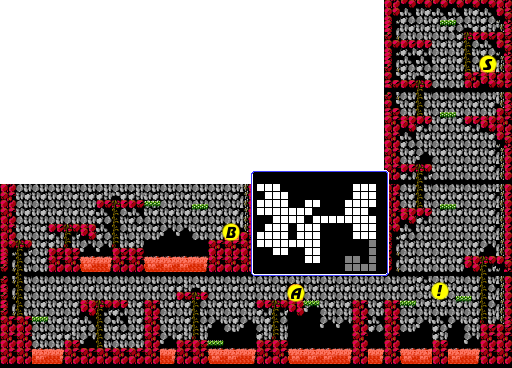 You will arrive through Door S in the upper right corner of the map, at the highest location, and you must descend to the depths below. This may be a very short segment, but it's one of the most dangerous. In addition to the lava that lines the bottom of the zone, and the fireballs that erupt from certain segments of it, you will face a new and dangerous enemy: the fire breathing dragon. They patrol short sections of platforms and occasionally belch a jet of fire at your face. Attack these giants from a safe distance.

Carefully make your way down through each screen, climbing down the vines where necessary; never simply fall through the bottom of the screen as that will cost you one life. Once you make it to the very bottom, you will notice the fireballs that spew out of the ground. Do your best to avoid hanging around those areas for too long. Before you make it to the first door, there is a hidden door behind the rocks which you can access while riding the horizontally floating platform.

This scene should be familiar to you by now. As always, Konami Man is positioned in a place that is only accessible by moving platform. It's very likely that you will have need of his aid at this point, but the fact that you're just about to rescue a Goonie, and get a refill on all your energy makes the first visit kind of moot.

A rather simple chamber, you should be well aware of the ability to poke holes in the ceiling with your Hammer by now. Do so, and use your Ladder to climb up and there you will find the fifth Goonie, who will no doubt be grateful for your rescue.

Believe it or not, your mission here is accomplished as there's not much else that can be gained from exploring this area. If you continue on your way to the left, you will eventually climb a vine that leads back up to the section above. A short trip to the right will lead you to the only other door in this area, Door B, which will get you going to your next destination where the sixth and final Goonie awaits.

Behind this door lies another warp zone. This one will take you from the very bottom of the right front layer to the very top of the right back layer. There are no items that can be gained through its exploration, but there is an interesting man in the right room. His identity is given only as the Ambassador of Konami, although how or why he obtained such a position is not explained. He simply informs you that you must rescue all six Goonies in order to save Annie who, if you didn't know by now, is the ultimate rescue target of the game. So without further ado, head through the back door of the left room.