You control Mikey on his journey to rescue all six other Goonies and the mermaid Annie, who have been captured by the Fratelli family. Regardless of how many people Mikey rescues, it's a solo mission the entire way. He'll have to travel through a variety of locations based around the Fratelli's remote wilderness hideout. Mikey's primary means of defense is his yo-yo, which he can use to attack anything in his range. He can later obtain other weapons, as well as auxiliary weapons such as bombs or Molotov cocktails, which are limited in supply. Mikey has a health meter, which starts out with two bars. For every Goonie that Mikey rescues, he will gain one extra bar, for a total of eight bars. Mikey will lose one life whenever his health meter is entirely depleted. If all of Mikey's lives are lost, the game is over, and the player may opt to continue the game, or Ma Fratelli will provide the player with a password that the player can use to continue with all of the currently collected items and rescued Goonies at a later time.

The status bar is visible at the top of the screen of the side-scrolling portions throughout the game. From left to right, it shows the following pieces of information: 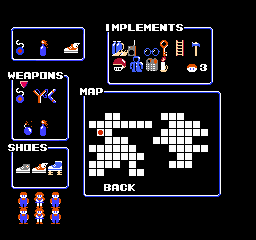 The subscreen shows you a lot of information pertaining to your inventory and location within the Fratelli hideout, including the following: