Hello Zuke! Welcome to StrategyWiki. Thank you for your contributions. If you have any questions, just contact a sysop through their talk page or post on the staff lounge, and they'd be happy to help. If you need help editing, check the StrategyWiki Guide or ask a sysop, we're usually around. On the other hand, if you have ideas for StrategyWiki, bring them up on the forums. To keep up-to-date with the goings on of the wiki, consider adding the noticeboard to your watchlist.

or using four tildes (~~~~); this will automatically produce your name and the date. Feel free to delete this message from your talk page if you like, or keep it for reference. Happy editing! — WarioTalk 22:23, 23 June 2014 (UTC)

The Show preview button (right next to the Save page button) lets you see how your changes will look before saving the page. You can use Show preview as many times as you like until you get the page how you want it. You can also edit the whole page at one time, as opposed to by section, by clicking the Edit tab at the top of the page. Hopefully these little shortcuts will make it easier for you to get the desired result when you're editing, and save you a little time. Thanks for working on the wiki! — Procyon 20:42, 29 June 2014 (UTC)

Just a reminder. You have a lot of rapid edits to a single page over a short period of time. You'd really be helping us out if you use the Show Preview button and only saving once when you have the page the way you like it. Thanks very much. Procyon 14:10, 28 September 2016 (UTC)

In order to keep pages on the wiki neat and uniform, we employ certain formatting and templates to help us accomplish this. When creating a new page, please use one of the preload buttons located above the edit text box (e.g. click on "Guide page" to add {{Header Nav}} to the top and {{Footer Nav}} to the bottom), which will insert the needed templates and formatting for you. These templates are very handy because they include the templates that are required for each page type. If you are unsure about how to use them, or what pages to use them on, please let me know. Thanks for keeping the wiki organized! — Notmyhandle (talk • contribs) 00:18, 17 July 2014 (UTC)

I think this was more in reference to the need to click "Main game page" when starting a new guide as you did for Dark Cloud. That's why I had to start the page over, it lacked all of the proper templates. It's a good idea to look around the site, and see how people are accomplishing the same things you would like to do, before you try to do them. Procyon 18:08, 17 July 2014 (UTC)

I just wanted to thank you for all of your hard work on FFV. I know that it's truly a labor of love. Your efforts are greatly appreciated. Procyon 13:45, 1 June 2015 (UTC)

I'm not certain about this, you'd have to experiment with it, but I think the multi-control selection template would also allow you to swap names as well. Might be worth taking a look at? Of course, once you start that, then you have to concern yourself with getting the names right for all the various versions... Procyon 13:26, 26 June 2015 (UTC)

Actually I was just thinking about that as a possibility earlier today. First, since the word 'controller' is pretty much hard coded into the the select controller template, I was thinking of making a variation, 'select-version', which would be more applicable to the problem at hand, then a second template 'version' which would go in the page where needed. So the syntax might look like

I don't think it's needed much in the appendices; Listing all three names in a table isn't a big deal since you can just add a new column. The current version of the Armor page is more or less what I had in mind. The version issue gets awkward in the walkthough and to some extent in the getting started pages. You can't say "Be sure to cast Wall (SNES)/Reflect (PS1, GBA) before hitting the Garkimasra (SNES)/Harpy (PS1)/Jackanapes (GBA) with your Gungnir (SNES)/Short Spear (PS1)."
Here are my concern with template:controller idea:
My thinking is, even if these are all issues it would still be better than the situation now. So the real question is whether there is a better possibility. Another idea is to simply fork the guide and substitute the corresponding names in each version. Probably not a good idea because changes would need to be made in three (or four) places. Another idea I was toying with is to make a template which is a giant #switch statement to look up each combination. It would probably be too difficult to program though and if used multiple times on a page it could seriously affect page load times. Anyway, I'm still trying to figure out how the Control and Control selector templates work; my template writing skills are rather basic. --Zuke (talk) 21:47, 26 June 2015 (UTC)

I think this may be overkill. If the character names aren't that different from each other, it may be better to pick one version, stay consistent throughout the guide, and just link it to the lookup page. -- Prod (talk) 04:05, 27 June 2015 (UTC)

That's basically the approach now. Though most of the name differences are minor, some can be confusing. For example it took me a while to realize that the Wall spell in one guide was Reflect in my version of the game. The bigger issue is people coming in and 'correcting' the names of things because they don't match what's in their version. But, now that I'm thinking about it, the task of replacing all those names with template would be long and tedious; there are a couple dozen pages in the walkthough and probably dozens of names used on each of them. (I picked a page at random and stopped counting at 20.) My vote for which version to pick would be for PS1; I can't be the only one with old (= vintage) disks lying around. Plus, any other choice would run into the same long, tedious task of conversion. --Zuke (talk) 14:10, 27 June 2015 (UTC)

We can potentially run a bot to do most of it, and then have users fix any missing options. Maybe replace every occurrence of Character with {{FFV/Name|Character}} that will link to the lookup page. -- Prod (talk) 22:07, 27 June 2015 (UTC)

I don't think you're understanding the problem. If it was just character names it wouldn't be an issue. But it's character names, item names, enemy names, weapon names, armor names, spell names, job names, place name, and maybe some others that I can't think of now. Search and replace would work on some, but then there are names that are used only once so you might as just do the change manually. And a bot couldn't anticipate people adding new names to the guide that aren't on the bot's list; there are hundreds of names used in the game that aren't in the guide (yet). Plus there's things like Potion which mean different things in different versions. So when you take the time to program the bot into account I don't think it would really save much. If you're going to create a bot then you might as well program it to subst in the templates so the result will be usable by people with different versions of the game. --Zuke (talk) 16:09, 28 June 2015 (UTC)

I've a couple captures to share with you for the mobile FF5, mainly to highlight the control schema. These are from the latest iOS build. Take them and use them as you will. I do not have picture tools enough to edit them as need be, so here you go... 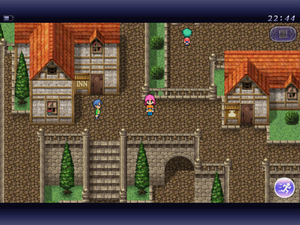 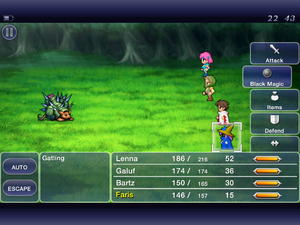 If these turn out useful, good luck to you. My apologies if they appear cut off.

Thanks, I'll keep them in mind for when I start editing the guide again. If memory serves, the first one is from Walz and the second one is from one of the nearby random encounters. --Zuke (talk) 22:02, 7 July 2015 (UTC)

The field photo is actually from Carwen, and the battle captured nearby. I had gotten past Karnak at one point, but fumbled in Walse by freeing Lone Wolf (he actually steals the Shock Whip all the way in Jacohl, IIRC), and had to restart.

In the meanwhile, I've been debugging a bunch of fragments and run-ons in that guide, page-by-page. Until I figure out how the text changes figure into the story, I'll leave the grand majority of PSX names intact. "Lenna" is the one name that is understood to be accepted in all but the PSX text.

I was thinking split each territory except the last into two pages, so there will be a The Forest of Hope II eventually. I did this kind of thing for the Final Fantasy V walkthrough and it seemed to work well. The middle three locations are big enough that they should probably have multiple pages anyway. Also, I was going to list which parts are covered in which page in the TOC, so ppl looking for a specific part can find it easily. Hopefully it will be a useable walkthough within the next month.

You may want to consider moving the parts page to /Walkthrough, and having an overall description of how to get through the game there. Something like Mega Man/Walkthrough. You may also want to do disambiguation type links, such as The Forest of Hope (Day 2). You could also list prerequisites to complete before each re-visit to a level. -- Prod (talk) 18:33, 24 August 2016 (UTC)

I want to avoid being overly prescriptive about which tasks to perform on which days. One of the beauties of the game is you can play it a different way on each run, so I don't want to spoil the fun by saying you should complete such and such tasks on a specific day. If it was going to be a speedrunner's walkthrough then you'd need to be very specific about which tasks need to be completed when, but that's not the type of guide I have in mind. I think the prereqs could be put in the TOC. It's not that complicated; you either have the Blues or you don't, and you either have enough parts for a territory or you don't.--Zuke (talk) 19:44, 24 August 2016 (UTC)

Yeah. I didn't know Jak II was listed as 0, it was probably higher than that before I started. RE4 is probably still a 2 and will be until the walkthrough is done. I was going to make it 3 then, but at the rate I'm going that will probably be at least week from now.

Thanks for pointing that out! I've updated the Header Nav template to link to the guide so the information isn't duplicated. I've also clarified what CS3 should mean, and I think it matches with the category pages. Let me know if you feel any definitions are still inconsistent and we can clean it up. Also, please remember to sign your posts. -- Prod (talk) 23:46, 23 October 2016 (UTC)

Every page in the guide should be linked from the ToC, and there are very few exceptions where we use redirects within guides. If you feel the content is useful, please move it to the relevant page. Otherwise, please mark it for deletion. -- Prod (talk) 19:59, 17 June 2017 (UTC)