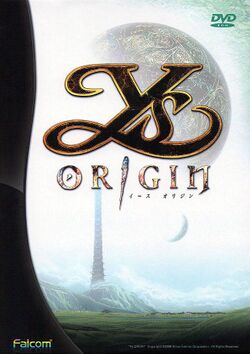 Ys Origin is a prequel to the Ys series of games, developed by Nihon Falcom and released in 2006 for Windows in Japan. In 2012, the game received an English language localization by XSEED Games, widescreen support, and achievements and was released on Steam. It was later ported to the PlayStation 4, PlayStation Vita, Xbox One, and Nintendo Switch by Dotemu starting in 2017. The console ports were localized in additional languages and had a different set of achievements and trophies. The Xbox and Switch version features a new Speedrun mode and the option to enable blood.

This game is a prequel to the Ys series, taking place 700 years before the events of Ys: Ancient Ys Vanished, where a team of knights and sorcerers transport to the surface to investigate the disappearance of the twin goddesses. The player takes control of one of three characters, the first two being Yunica Tovah and Hugo Fact.