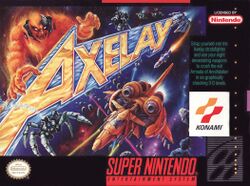 Axelay (アクスレイ, Akusurei?) is a shoot 'em up video game developed by Konami for the SNES. It was released on September 11, 1992 in Japan, later in that month in North America, and the following year in Europe. The game was re-released on the Wii Virtual Console service in Australia and North America in 2007 and in Japan in 2008.

Axelay is a sci-fi scrolling-shooter in the same vein as other Konami titles such as Life Force (Salamander) and Gradius. The game features both horizontal and vertically scrolling levels, and allows the player to choose three different weapon-types, which increase in number as he or she progresses through the game.