This is a vertically scrolling level, above a city.

After the ground section, you will encounter a maze. You will need to shoot the yellow corners in order to break down the walls. 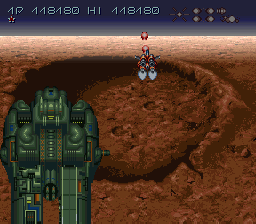 The mid stage boss has two front laser cannons, and will also shoot from side turrets. When they are destroyed, it will release a number of ships from behind the craft, and form a protective circle. These ships can be farmed for extra points if desired.

This ship is likely to collide with the Axelay if it has the laser cannons. To dodge, fly behind the enemy ship.

After defeating the battleship, you will advance across the terrain, and get to attack more ground units.

The next maze is a bit more difficult. To proceed through, you will need to destroy turrets located on the maze wall, recognized as a spinning cylinder. 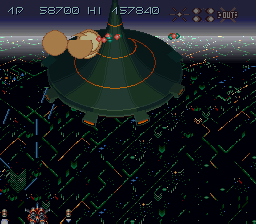 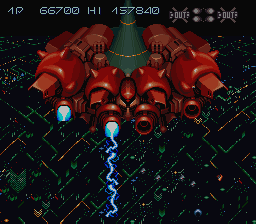 This is a three stage boss. The first stage is a small object with four orbiting ships. it will

The second is a large ship, which will fire a large circle of bullets from its turrets every few seconds. While short range, they will explode, causing you to either be pinned down in the corner, or being forced to dodge the tight set of bullets. When all turrets are destroyed, its core will become exposed, before it projects an additional attack form..

The third form has a set of front turrets that will either shoot a beam weapon, or a missile. The beam shots are preceded by a small glow, before firing for a few seconds. The missiles will slightly track the vessel and are fatal on contact, but can be destroyed after launch. To destroy this vessel, aim for the center of the UFO.