Like most visual novels, the controls of Bad Apple Wars are simple;

to skip text (by default this can only be done for text that has been read before, though there is an option to skip all) and

to open the menu, which gives you the option to save your game, load another file, change the settings (such as volume or text speed), and return to the title screen. You can also use

to review text already read or rewind to a previous point in the scene. From the main menu, you can start a new game or load a save, as well as access the gallery, where you can view collected CGs. 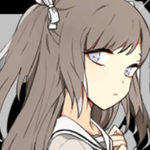 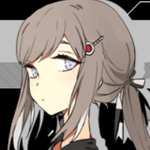 Rinka (リンカ) is the main character of Bad Apple Wars, thus the story is told from her perspective. Her name can be changed, though it will not be spoken by the other characters in that case. Her appearance is determined by the first choice she makes: to be a "good apple" and join the Prefects (pictured to the right), or break the rules and join the Bad Apples (left). If she joins the Prefects, she wears a disciplinary committee armband and the school uniform, and if she joins the Bad Apples, she has a new outfit made for her.

While Rinka appears to be an average high school student, she struggles with feelings of inferiority, even at NEVAEH Academy. While everyone around her seems to have great aspirations that drive them toward their goals, Rinka lacks passion and a goal in life, causing her to lament her "emptiness" often. Depending on the choices made throughout the story, Rinka can not only form a deep connection with one of her allies, but also overcome her own insecurity.

A function unique to Bad Apple Wars is the Soul Touch feature. Using the PlayStation Vita's touch screen (or on PlayStation TV, a cursor that can be activated in the settings of the system), the player can directly interact with CGs, drawing out interactions between Rinka and the subject of the image. During the common route, you must touch certain spots of the CG in a specific order, specified in the walkthrough of each love interest's route. This will then activate a special scene detailing a memory of the love interest's life.

Past the common route, when on the path to a good end or NEVAEH (bad) end, the Soul Touch function remains largely similar with a catch: touching the wrong spot in the CG will upset the love interest (indicated by blue lightning emanating from that spot when touched), causing his memory to appear more negative than it actually is and setting you on the path to a bad end.