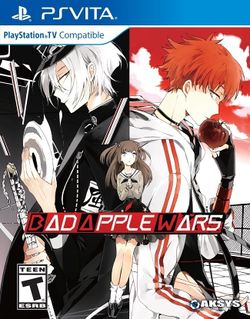 Bad Apple Wars (バッドアップルウオーズ, Bad Apple Wars?) is an otome visual novel developed by Otomate, a subsidiary of Idea Factory that produces otome games targeted toward girls. Like most otome games, players take the role of a female protagonist and make choices that lead toward branching paths, each focused on building a romantic relationship with a male character. It was published by Idea Factory in Japan on November 19, 2015. It was localized by Aksys Games two years later, announced alongside Collar x Malice and Period: Cube - Shackles of Amadeus, and released in North America on October 13, 2017 and in Europe on the same day.

Bad Apple Wars revolves around the theme of life after death, particularly in the form of rebirth, based off of the ancient philosophical concept of samsara. After the protagonist (default name Rinka) enters the strange NEVAEH Academy, she must decide which side to take between two warring factions: the Prefects, who make up the school's disciplinary committee and ensure trouble-free graduation of the student body, and the Bad Apples, a group of delinquents seeking expulsion from the school. The members of each faction have their own motives for joining them, and intend to bring Rinka into their ranks. The player must decide which path to take, based only on first impressions and the characters associated with them, in order to determine Rinka's fate for the rest of the game.

Rinka, who was caught in an accident on the day of her high school entrance ceremony, stood on the grounds of an unknown school. This is NEVAEH Academy, where lost souls may attend classes after death. In this school, as long as the school rules are observed and the student exhibits good behavior, their spirit will eventually experience graduation. Rinka, who was informed of her death by a suspicious man wearing a rabbit head, was then instructed to attend the entrance ceremony for NEVAEH Academy. Suddenly, there is a great explosion as the delinquents who have declared war on the school, the Bad Apples, make their entrance. The Prefects retaliate, leading to a battle in the school auditorium. In the midst of the battle, Rinka is approached by a man with red hair who asks her one question: "do you want to live?"