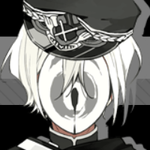 A white-haired boy who leads the Prefects. Like the other Prefects, he hides his face with a mask (hence the name given to him by the Bad Apples) and wears a special uniform unique to the committee. He does not display any emotions, acting as if he is a machine or a doll.

White Mask wields a ruler that doubles as a blade in battle, cutting down the rule-breakers that stand in his way with considerable skill. Unlike the other love interests' items, White Mask was given the ruler by the teachers that oversee the disciplinary committee, making his life before entering NEVAEH Academy even more of a mystery than it already is.