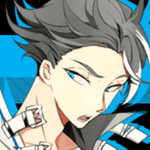 A boy with an intimidating appearance who wears a long white coat, as if part of a biker gang. He calls Alma "aniki" and adoringly treats him as his big brother. Though he appears to be a rude delinquent from a bygone era, Higa is actually a loyal friend who looks out for the other Bad Apples.

The item Higa had upon entering the school was a white ball, due to his love of baseball. He can treat the ball as any ordinary ball, such as in games of catch, but when he so desires, he can cause the ball to explode, wreaking havoc on the Prefects.