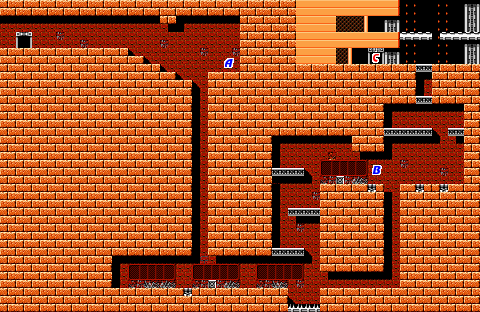 You may have encountered this kind of soldier in Area 8 as soon as you arrive in this area. Just do the same trick by shooting before changing height.

As you get closer to the steps, don't drop down too far. Instead, grapple to the low portion of the ceiling, and swing over the gap to the right so that you can collect the 1-Up doll at location A. If you begin walking too far down the steps, you won't be able to retreive it.

Fall down the pit to the area below, and you will encounter another soldier like the one you just defeated. Use the same technique against him, and continue past the box and on to the right. Climb up the platforms and prepare to defeat another soldier when you reach a set of springs in the floor at location B. Clear the soldier away, and either use the spring to boost yourself up to the next set of platforms, or simply grapple to the ceiling and swing over the pit. If you fall down the pit, you'll have to backtrack to the left and repeat the process of climbing up the platform. 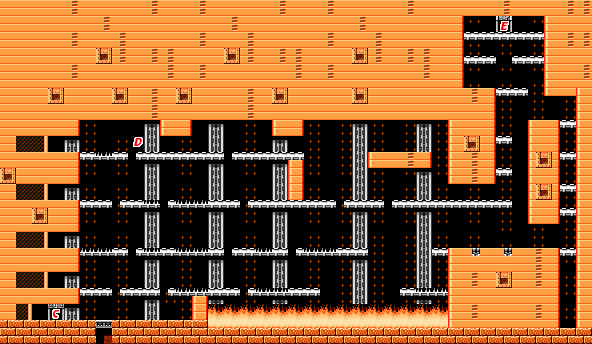 Once you reach this portion of the stage, head to the left and investigate communication room C.

When you're done here, the best bet is to climb as high as possible, to reach location D, before heading to the right. If you remain on the floor level, you will have to watch out for the fire below the lowest platform. All other levels contain spikes that you must swing over in order to avoid taking damage. In addition, several level have carts that automatically travel down the length of the platform, and can hurt you if they run into you. The top level is no exception, but to the right of D, you don't have to worry about any spikes.

Run to the right, away from the carts if one appears, and either drop down to the lower level when the top level ends, or connect your grappling hook to the ceiling and swing over to the platform on the right. Ultimately, you will be forced to drop down level and walk below the ceiling. At this time, green soldiers will begin to parachute down from above.

You'll have to climb up a series of short platforms in order to reach the boss entrance at the top. Watch out for soldiers who land on these platforms, and time your rise so that you don't collide with them. Clear them away and continue all the way to the top until you reach door E. 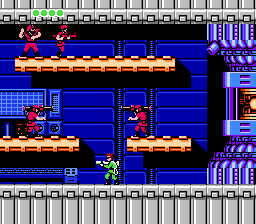 Like Area 8, there is no major boss in this battle, just another never-ending wave of enemy soldiers who storm in and try to stop you. Instead of shield enemies, there are two rocket soldiers you may have met in Area 1 before, who may also toss grenades at you. The rockets they fire don't cause any more damage than a regular bullet, so don't worry to much about them. It's best just to clear them away as quickly as possible, and then focus your attention on the core.

Reward: You will earn ten bullets and obtain the 3-Way gun, the aforementioned alternate weapon that is capable of destroying walls besides the rocket launcher. While powerful, it doesn't have the same range as the rocket launcher, so choose from among your weapons wisely.