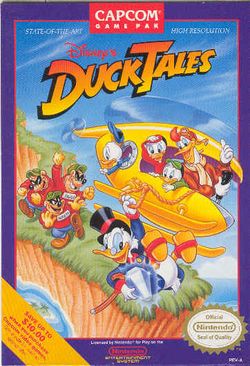 This guide is for the NES game. For the 2013 remake, see DuckTales: Remastered.

DuckTales is a platform game developed and published by Capcom in September, 1989 for the NES. It was ported to the Game Boy in November, 1990.

An HD remake was released as DuckTales: Remastered for PSN, Xbox Live Arcade, Wii U, and Steam in summer of 2013. The remake includes modified original levels, additional new levels, and animated cutscenes with voice acting.

Based on the Disney cartoon show of the same name, players guide Scrooge McDuck to gather five valuable treasures from around the world.