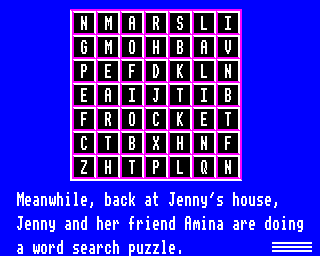 Note: Jenny and Amina's word search puzzle in this challenge is randomly-generated (so it might not look precisely like it does in the above screenshot).

At the start of this challenge the text "Meanwhile, back at Jenny's house, Jenny and her friend Amina are doing a word search puzzle." will appear at the bottom of the screen; once you've pushed Space, the text "All the words are to do with space or space travel." will appear at the bottom of the screen. Once you press Space again, the text "Martin bursts in. He is very excited and he wants to tell the girls about something he has found." will appear at the bottom of the screen - and once you have pressed Space for a third time, the text "Amina and Jenny want to finish their puzzle first. Can you help them to find four space words?." will appear at the bottom of the screen. Once you've pushed Space for a fourth time a cursor will flash at the bottom of the screen with the texts "Type in your guess, then press Return." and "or press F0/F1 for a clue." (the key that you must press for a clue depends on which version you are playing) below it; in B-Em, F0 is replicated by F1, but in !BeebIt, it is replicated by F10. The words to look for are: ALIEN, EARTH, MARS, MOON, PLANET, PLUTO, ROCKET, SPACE, STAR, SUN, VENUS and WORLD - but only four words are used in the puzzle, so once you've found one of them you'll have to type it in and press Enter to confirm it. Each of the word's letters shall then light up magenta in turn as Amina and Jenny tell you from off-screen: "Well done! That's a good space word!" or "Well done. That will do nicely." (for the first and second words), "Another space word! Only one to go." (for the third word) and "Congratulations! You have found all four space words!" (for the fourth word); you will also have to press Space each time they congratulate you to continue. Once you have found all four space-related words and pushed Space for an eighth time the following text will appear on the screen (Martin will also appear beneath his first line of dialogue, while Jenny and Amina will appear beneath theirs):

Once you have pushed Space for an eleventh time, Martin will run off the right side of the screen; Amina and Jenny will then also run off the right side of the screen in turn, and once you have pressed Space for a twelfth time, the game will proceed to its third challenge, in which you have to help Ollie clean the beach so he can find the probe (you may also choose to play this challenge on "easy" or "hard" difficulty, like some of the ones in Sky Hunter).

In the generation of the puzzle seen in the screenshot at the top of this page, the words used are ALIEN, EARTH, MARS, and ROCKET; however, there are five other generations of it, and the words used in them are listed in the table below (two of them also use the same words as two of the other ones):

However, if you should try to enter a space-related word which is not actually used in the generation of the puzzle that the game has presented you with, Martin shall tell you from off-screen "Amina and Jenny don't think that is a space word in their puzzle.", and you shall have to push Space to try again.

[Go to top]← How long in space? | Word searching | Cleaning the beach →