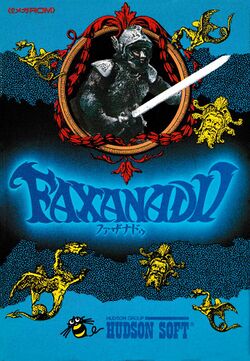 Faxanadu (ファザナドゥ, Fazanadu?) is an action role-playing game for the Famicom and NES. The name was licensed by developer Falcom and was developed and released in Japan by Hudson Soft in 1987. In 1989, Nintendo of America released the game as a first-party title in the United States under license from Hudson Soft. Nintendo also released the game to the European market in 1990. Faxanadu can be considered a side-story of Dragon Slayer II: Xanadu, which is the second installment of Falcom's long-running Dragon Slayer series. The title "Faxanadu" is a portmanteau formed from the names Famicom and Xanadu.

The game does not utilize a save game system, but provides passwords allowing players to stop and restart their journeys. Passwords, or "mantras" as they are known in the game, can be obtained from church-dwelling Gurus. Gurus also bestow Ranks to the hero when he meets certain experience totals; these determine the amounts of experience and Gold a player will possess upon resuming a game via password.

Faxanadu employs a color palette that relies upon browns, greens, reds, and blues, creating an earthy atmosphere to complement the underlying, real-world legends of elves, dwarves, and the World Tree itself. This was somewhat atypical compared to other games from its era, as many showcased bright, cartoonish graphics and outlined sprites rather than the more flushed, slightly Gothic style of Faxanadu. Similarly, the game's music (the work of June Chiki Chikuma) is designed to convey a rich, sometimes haunting tone during play. From the pedestrian beat of Eolis and the majestic melody in the Elven King's throne room to the driving theme of The Evil One's fortress, the compositions are intended to set the mood for each area, assisted by an array of organic sound effects.

Many aspects of the game's setting, especially the different shapes and forms of enemies, are largely inspired by a mixture of Norse mythology and Japanese mythology with some derivatives of Eastern religion. Christian icons found in the Japanese version are removed in the international release. In the Japanese version, Gurus can be seen holding a cross and images of a crucifixion are displayed inside the churches.

The player-controlled protagonist of Faxanadu is an unidentified wanderer. He has no name, though the Japanese version allows the player to choose one. The game begins when he approaches Eolis, his hometown, after an absence to find it in disrepair and virtually abandoned. He meets with the Elven king, who urges him to set forth and restore the realm's prosperity by defeating a being known as The Evil One.

As the story unfolds, it is revealed that Elves and Dwarves lived in harmony among the World tree until The Evil One emerged from a fallen meteorite. The Evil One then transformed the Dwarves into monsters against their will and set them against the Elves. The Dwarf King, Grieve, swallowed his magical sword before he was transformed, hiding it in his own body to prevent The Evil One from acquiring it. It is only with this sword that The Evil One can be destroyed.

The game takes place across three ascending worlds made to resemble the World Tree's sections: one covered in a fungus-like substance (the roots), one enveloped by poison mist (the interior of the trunk), and one that resembles the tree's branches.

The Legend of Heroes