Final Fantasy IV: The After Years/Walkthrough 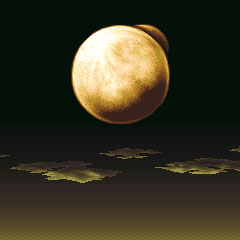 Long ago, this Blue Planet was saved by the prayers of an entire people. Two moons became one anew, and time inexorably marched on...The day of departure has arrived for the heir of the holy paladin.

In the skies above the airship, two moons float up listlessly, one ominously growing ever larger. Why has this dark harbinger returned? A new destiny has begun to unfold, and yet, as always, the crystals brim with silent light.

And with that begins the tale of The After Years. This walkthrough will guide you through the game's many chapters in your quest to discover the meaning behind the Red Moon's return. For this guide, the chapters have been organized in order of their WiiWare release, though they can be played through in almost any order you like.

Go to top
← Characters | Walkthrough | Prologue: Return of the Moon →