Though this world is optional, completing it is recommended to complete Jiminy's Journal. The first visit will happen in the main story. All subsequent visits are unlocked by collecting torn pages.

The first visit occurs when Merlin summons Sora back to Hollow Bastion. After the scene, approach Donald and use the reaction command to enter the book. Approach the pop-up nearby to enter the 100 Acre Wood, particularly "Pooh Bears Howse". Begin by looking behind the house for some treasures: an AP Boost, a Mythril Stone, and a 100 Acre Wood Map. Speak to Pooh to trigger a scene, only for Sora to be kicked out of the book. Battle the Shadows and Soldiers outside and Sora will return to the book only to find that its been emptied. Return to Pooh's house to find that Pooh has forgotten Sora. With no other choice but to leave, you'll find yourself back in Merlin's house. After another short scene, you'll obtain the Baseball Charm, allowing you to summon Chicken Little. You can now leave the world in search of the torn pages.

Pick up the Mythril Gem by the tree stump, the AP Boost by the side of Piglet's House, and the Defense Boost behind Piglet's House. Approach Piglet and use the Rescue reaction command to begin the mini-game. 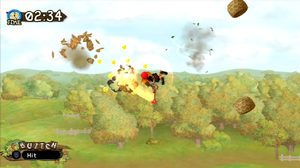 While floating through the air, collect points by hitting various objects. Use reaction commands on the tornadoes to suck all obstacles on the screen into it, breaking them in one hit. Pooh will fall off if Sora is hit, in which case you must float over to his position and use the reaction command to grab him; to avoid this, don't stop attacking. Once you reach Piglet, you can use the reaction command to rescue him. To complete Jiminy's mission, you must gather 18,000 points before rescuing Piglet, requiring you to break almost every object onscreen. Time your tornado usage to when multiple objects gather onscreen, and focus on the tree stumps and honey pots, as they give the largest amount of points. To replay, speak to Piglet. 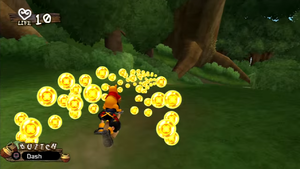 Collect points as you slide on the hunny pot. You are capable of losing Pooh if you get hit, in which case you must approach him and pick him back up with the reaction command, but you can find some temporary protection in the form of Gopher. He will be floating on a balloon in the middle of the track, one in each area of the course, and can be grabbed with the reaction command as Sora slides by. He will protect you from one obstacle, essentially acting as a shield, before his balloon pops. You can only fail this mini-game if Sora loses all of his health, represented by the life counter in the top-left corner of the screen. 8,000 points must be collected to fulfill the mission requirement in Jiminy's Journal; as long as you don't lose Pooh, you should be able to clear this easily. Speak to Rabbit to replay.

Pick up the Magic Boost to the left of Kanga's House and the Orichalcum to the right of it. On the far right side of the map is an AP Boost. Speak to Tigger to begin the mini-game. 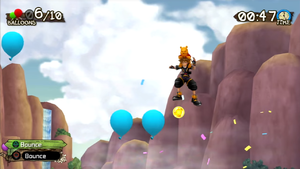 Collect points by bouncing on balloons to pop them as well as give Sora a boost up to higher balloons. The higher Sora goes, the smaller the balloons get, and the more points they give, though the highest balloon is the largest and also completely still, acting as a reward for reaching that height. Move from side to side to time Sora's landings so that he lands on a balloon; as long as he hits one and doesn't waste time by making the big fall back down, your score should be fine. You must pop ten balloons to clear it. For Jiminy's Journal, you must reach 2,000 points, which should be accomplished rather easily. Speak to Tigger to replay.

Speak to Kanga to begin the mini-game. 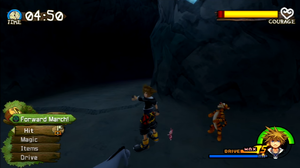 In this mini-game, Sora traverses the Spooky Cave with the animals of the 100 Acre Wood in an effort to find Pooh. There are many winding paths in the cave, and as you walk, the party's courage (represented by the gauge in the top-left corner of the screen) will drop. Certain events will cause courage to drop even faster, such as Sora slipping on ice or the arrival of bees (which Sora must knock away before the party can keep moving). When the gauge drops completely, the "Settle Down!" reaction command will become available, refilling the courage gauge and allowing the trek to continue. Sora can also perform the "Company Halt" reaction command if a part of the cave comes crumbling down from the ceiling; wait for it to drop before proceeding with the party, or they will panic. You must also stay close to all of the animals as if you lose one, you must go back for them. Reach Pooh at the end of the cave to clear the mini-game, and do so in less than 90 seconds for Jiminiy's Journal. Speak to Kanga for a replay. Within the cave, you can find six treasures in total: a Mythril Gem, a Mythril Crystal, two AP Boosts, Orichalcum, and a Guard Recipe. Make sure to explore all paths upon revisit.

Clearing this mini-game will earn you the Sweet Memories Keyblade and the Spooky Cave Map.

Pick up the Cosmic Ring by the bushes to the left. Walk past the hill for a Style Recipe, then climb it and speak to Pooh to begin the mini-game. 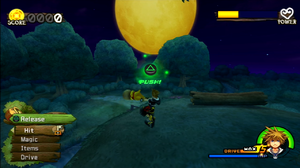 This mini-game is the shortest of them all. Simply press

to stop the power gauge, then press

again to stop swinging, essentially selecting the direction which the honey pot will fly in. Any score will suffice to clear the mini-game, as long as the pot is flung off of Pooh's head. Earn a score of at least 8,000 to clear the requirement in Jiminy's Journal. To get a high score, stop the power gauge when it's near max capacity, then aim the pot at the moon.

For clearing the world, Sora will receive the most powerful form of Cure magic, Curaga. He will also receive the extremely rare Orichalcum+.