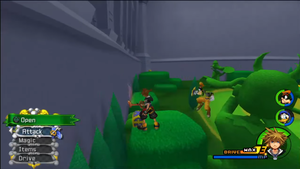 There are Heartless all around the Courtyard, but there are also chests behind every hedge.

You begin the world in the Gummi Hangar. Chip and Dale direct you to Queen Minnie in the Library. Exit to the Courtyard, where Heartless are hiding in every corner. Begin by heading straight toward the hedge shaped like an animal playing an instrument. There are some hedges that wrap around behind it, acting as steps, where at the top, a Blazing Stone can be found. Head right into the corner for a similar structure of hedges, with an AP Boost sitting in plain sight. Move right past the animal playing cymbals and toward the trombone, as there is another chest behind this one containing a Mythril Shard. In the center, around the side of the hedge castle that leads to the Gummi Hangar is a Hi-Potion. Go left around the castle from here and climb the highest ledge for a Star Recipe. Now head from the Gummi Hanger entrance to the left, where you will find a hedge of a pig; behind it is a Mythril Stone. To the left of this is more hedges, with a Mythril Shard on the highest ledge. You can now head left from here and into the Castle Colonnade. 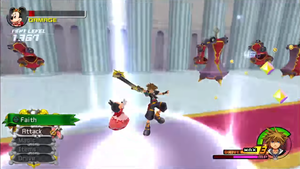 Use the Faith reaction command when Minnie is close by to hurt and push back all surrounding Heartless.

Fight the Heartless down the corridor until you reach the door at the end of the path, which leads into the Library. Open the chest in the corner of the room for some Torn Pages, then speak to Queen Minnie for a scene after which you will obtain the Disney Castle Map. Exit with Minnie by your side to begin an escort mission. The objective here is to protect Minnie from the many Heartless on her way to the Audience Chamber, using

to call her over when the coast is clear. While this may seem difficult initially, Minnie is actually very capable of holding her own. Standing close by her will even give you the opportunity to perform a new cooperative attack via the Faith reaction command. Press

to finish the task once you reach the sealed door, then enter the Audience Chamber for a new mission: escort Minnie to the very end of the long Audience Chamber. Fortunately, with the use of Faith, this task should be accomplished rather easily. Once the room is empty, call Minnie over to the throne for Auto Summon and another scene.

You will now find yourself in the Hall of the Cornerstone. Exit to the World Map via the save point to Merlin's House in Hollow Bastion. After the scene, enter through the door to Timeless River.