Guts Man stage takes place along a construction site. This is a short but difficult stage. Mega Man must first negotiate moving platforms that periodically give way, and then deal with pickax-wielding robots. Guts Man was designed for land reclamation work, but was created specifically for construction of public works. By far the strongest of any robot, Guts Man is able to lift objects of up to 80 tons over his head and hurl them at his foe with startling accuracy. He moves slowly, throws boulders at Mega Man, and makes the ground shake whenever he lands from a jump. 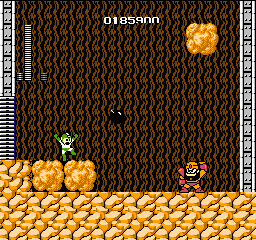 Guts Man is not to be taken lightly. He is large and powerful. He is so heavy that when he jumps into the air and lands, the ground shakes for a short while. If you're standing when he lands, you will be temporarily stunned and unable to move until you regain your footing when the shaking stops. Your only defense against this is to jump in the air just before Guts Man lands. Every now and then, a boulder will fall from the ceiling when Guts Man jumps. He will catch and heave it at you. When the boulder hits something solid, it breaks apart into four pieces which keep coming. The easiest way to avoid getting hit, is to stand on the two boulders on the left side of the room, and leap over the rocks that Guts Man throws at you when they get close. Guts Man doesn't move around all that quickly, making him an easy target for you to attack, provided you don't get stunned by the earthquakes or get hit by the boulders he throws. If you defeat Guts Man, you'll earn his Super Arm ability, which grants Mega Man the strength to lift giant boulders and throw them. Note that Mega Man can't shoot while he's using this power, and boulders or giant blocks must be present for him to walk up to and pick up. If he walks up to an eligible object while using the Super Arm, it will flash, signifying that you can pick it up and throw it.

Guts Man's weakness
Guts Man is a pretty solid fellow, just like the rock that's all around him. The best way to remove rocks very quickly is with something explosive. As a result, Guts Man is very vulnerable to the explosions created by Hyper Bombs, the weapon you earn by beating Bomb Man. The bombs themselves will do no damage, only the explosions, so you must throw them somewhere close to his feet and hope that he sticks around long enough to get caught in the blast. He's so vulnerable to this attack that it only takes three bombs to do Guts Man in.