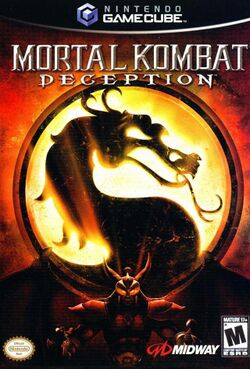 Mortal Kombat: Deception is a fighting game in the controversial and bloody Mortal Kombat series. Deception was developed and published by Midway for the PlayStation 2 and Xbox in October 2004. A GameCube version was published in January 2005.

Mortal Kombat: Deception precedes Shaolin Monks (in release date only) and follows Deadly Alliance. MK:D was released in two versions for the PlayStation 2 and Xbox, a regular version, and a "Kollector's Edition" which added a metal trading card and a bonus disc containing a history of Mortal Kombat, several video biographies of characters, and an "arcade perfect" version of the original Mortal Kombat.