From StrategyWiki, the video game walkthrough and strategy guide wiki
Jump to navigation Jump to search
Order Up! | Table of Contents | Gameplay | Walkthrough 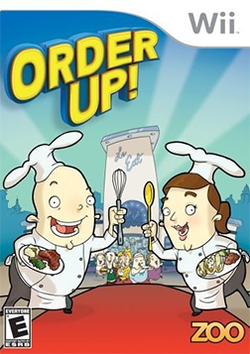 Order Up! is an action game with a Cooking and Time-Management theme. It was developed by SuperVillain Studios and published by Zoo Games for the Nintendo Wii. The game was released in the United States on July 22, 2008, in Australia on October 23, 2008, and in Europe on October 24, 2008.

Order Up! is based on the concept of managing a small diner as the head chef, however this is not to be taken lightly as there are a variety of patrons who come to your diner and most of them have specific wants for their food. To fulfill their desires, you will have to purchase spices and add them to your food. This is also how you create chef specials. On top of the cooking minigames, there are a variety of non-cooking minigames such as flicking rats off of your cooking apparatus and cleaning dishes for the Health Inspector.

Welcome to the island of Port Abello! This little island out in the middle of the ocean has something for everyone, from its sunny beaches, to its old-world charm. But what makes it really shine is its food! In fact, Port Abello has been named the world's top culinary destination every single year in a row... forever!

In this city, everyone takes their food very seriously. If you aren't the best cook in town, you're stale bread, and nobody likes stale bread unless they're eating salad.

So get cooking, because rumor has it that the Fortified Chef Competition is coming to the island soon, and if you really want to make a name for yourself, that's the competition to win!