Princess Tomato in the Salad Kingdom

From StrategyWiki, the video game walkthrough and strategy guide wiki
(Redirected from Salad no Kuni no Tomato Hime)
Jump to navigation Jump to search 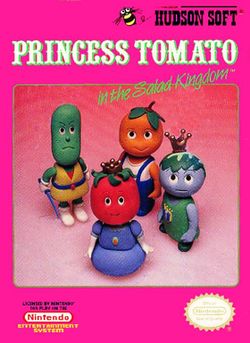 Princess Tomato in the Salad Kingdom (サラダの国のトマト姫, Sarada no Kuni no Tomato Hime?) is an adventure game by Hudson Soft originally released in 1984 for the NEC PC-8801, NEC PC-6001, Fujitsu FM-7 and MSX Japanese home computers. On May 27, 1988, it was ported to the Famicom. It was then translated and published on February 8, 1991 for the NES in North America. It was also released on the Wii's Virtual Console in Japan on January 19, 2010 and in North America on February 8, 2010.

The characters are primarily cartoon-like anthropomorphic fruit & vegetables. Taking the role of Sir Cucumber, a knight, the player is assigned by King Broccoli (now deceased) to defeat the evil Minister Pumpkin who has kidnapped Princess Tomato. Early on, Sir Cucumber gains a sidekick, Percy the baby persimmon, who offers advice and helps throughout the quest (and always calls Sir Cucumber "Boss").

Princess Tomato in the Salad Kingdom plays similarly to a text adventure, though due to the NES's lack of a keyboard accessory, the possible commands are represented by buttons which line both sides of the screen. The commands are fixed and do not change during gameplay. Primarily, the game consists of still screens with the exception of the "finger wars", mazes and occasional animated character, such as the octoberry and fern birds.

"Many growing seasons ago, there was a place where vegetables lived happily, and in perfect harmony. One day, Minister Pumpkin betrayed King Broccoli. He kidnapped Princess Tomato and stole the Turnip Emblem. He took them to his castle in the Zucchini Mountains. He sent his cruel Farmies out to terrorize all the vegetables in the Salad Kingdom. Shortly thereafter, the poor King died from the loss of his beautiful daughter. But he promised you, brave Sir Cucumber, the Princess' hand and the kingdom if you bring them back safely. God speed Sir Cucumber! Hurry! Saladoria is down this path. The Zucchini Mountains are over yonder."

Giovani Akira Faganello in association with Pixeltemple has created a PHP/HTML fan version of Princess Tomato in the Salad Kingdom called "Princess Tomato in the Salad Kingdom - REMIX". This version, which is currently offline has updated graphics for the first level, and are made to match the original game graphics. Graphics for all other levels are the same as the original NES version and it mostly retains the same dialog from the original game.