This is the first game in the Spore series. For other games in the series see the Spore category. 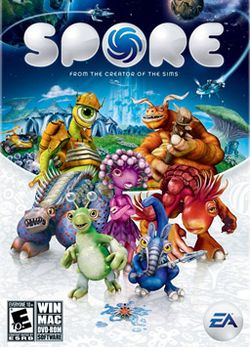 Spore is a god game by Maxis and designed by Will Wright that allows the player to control the evolution of a species from its beginnings as a multicellular organism, through development as a sapient and social land-walking creature, to levels of interstellar exploration as a spacefaring culture. The game has drawn wide attention for its massive scope, and its use of open-ended gameplay and procedural generation. Spore was released on September 4, 2008 in Australia, September 5 in Europe, and September 7 in North America. To promote the game, the Creature Creator portion was released separately as Spore Creature Creator. Two spin-offs were released around the same time as the main game: Spore Creatures for the Nintendo DS, and Spore Origins for the iPod, iPhone, and mobile phones. There is also a Wii spin-off called Spore Hero, released on October 6, 2009. An expansion pack was released recently called Spore: Galactic Adventures.

Spore allows players to create their universe by evolving a creature through five stages.

Spore is completely made of player-made creations. Whenever something is created, it's uploaded and downloaded by other players. This is happening all the time you're online and playing Spore. What you can create includes.