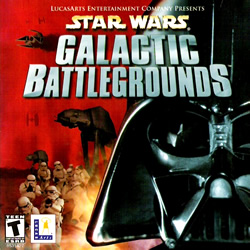 Players have a choice of factions and campaigns. The factions in the original game include the Wookiees, Royal Naboo, the Trade Federation, the Empire, the Rebels, and the Gungans. There are two campaigns in the game centered on the Wookiee race, and one campaign for the Gungans, the Trade Federation, the Galactic Empire, and the Rebel Alliance respectively. An expansion pack, Clone Campaigns, was released in 2002, adding two new factions and campaigns. Later that year, both Galactic Battlegrounds and Clone Campaigns were released in a box set, Star Wars: Galactic Battlegrounds Saga. No sequels have been made, although other Star Wars themed RTSes have been made such as Star Wars: Empire at War.

The games were built on the Genie Engine, the same one used in Age of Empires, and Age of Empires II. Online play is mainly played through GameRanger or Voobly, maintaining a small base of users. Mainstream online play was considerably damaged after Zone.com, the main site for online play, closed down all CD-ROM games on June 19, 2006 due to financial problems.

The player starts the game with a Command Center, a scout, and three workers (in a normal random map game) for whichever of the six original factions they choose. The player searches and gathers resources such as Food, Carbon, Nova Crystals, and Ore and then uses the resources in order to create new buildings, units, workers and so on. Food is used for low-end units and troopers, as well as the work force. Carbon is used in place of Wood in Age of Empires 2 for buildings and artillery. Nova Crystals create the more high-end units and can be gathered through getting special "holocrons" (from Relics in AoE 2). Ore is used for defensive structures as well as the Gungan unique unit Fambaa. The player can build separate units at separate buildings designed specifically for different types of units. The player can advance through the four Tech Levels by paying a certain amount of resources. When a player advances a Tech Level, more units, buildings, and upgrades become available.