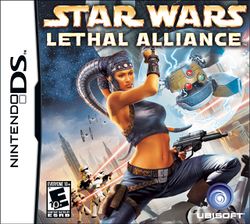 Star Wars: Lethal Alliance is the first non-movie tie-in Star Wars game to be released on the Nintendo DS and PlayStation Portable. Instead of being developed by LucasArts as most Star Wars games are, Ubisoft acquired the rights and became the developer and publisher of the game. It takes place between Star Wars Episode III: Revenge of the Sith and Star Wars Episode IV: A New Hope. Despite having the same storyline and using the same characters the two versions are quite different to each other and try to use the respective handheld to its full potential. The DS version uses the touch screen to solve puzzles and hack into places, whilst the PSP version features lush 3D graphics and brings in more enemies for you to face. Both versions have multiplayer modes, the DSes being multi-cartridge multiplayer.