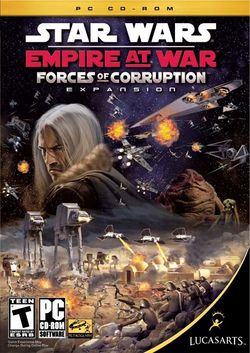 Star Wars: Empire at War: Forces of Corruption is the expansion pack for Star Wars: Empire at War. The Rebels won the day but the battle is not over yet however. As seen in the Star Wars Storyline the Rebels fled Yavin 4 and went to Hoth with the agents of evil on their tail. Meanwhile, Tyber Zann tried to build a very big criminal faction that will be feared across the universe. They will do racketeering, bribing and piracy to get what they need.