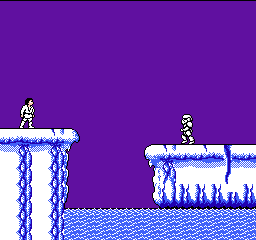 You will begin this stage moving right across the surface of the ice planet. Defeat the four small scorpion creatures by squatting down, and watch out for the flying manta ray that appears. Before you jump across the first gap, be aware that there is a dangerous Stormtrooper on the far side of the next platform who will likely shoot at you as soon as you land. It's better to scroll the screen over as far as you can and wait for him to turn around before you leap to the platform. From there, you must jump across three blocks which begin to disintegrate as soon as you land on them. Leap off of them quickly and jump to the next platform. You'll see a Landspeeder capsule below, but the only way to collect it is to activate Force Levitate, and travel under the platform. It's not worth collecting since riding the Landspeeder over water can put you in a far more dangerous situation if you crash and have nothing to land on. Instead, approach the narrow pass with spikes on either side, get a good running start so that you don't fall on to the lower spike, and quickly tap

so that you don't jump too high and crash into the upper spike. 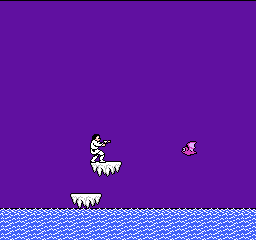 From the steps, leap over to the single block above the flying manta ray, and on to the left side of the small ice pyramid where a small creature leaps up and down from the top block. Slash it away, and leap over the water to the next pyramid. Kill the creature and jump from the top block to the two single blocks ahead and on to one more pyramid. At this point, you will need to leap from the right side of the pyramid to reach the ledge beyond (or activate Force Speed and jump from the top block). Take out the Stormtrooper waiting for you, and leap over to the single disintegrating block to the large structure made out of disintegrating blocks. There is a pistol capsule that will come in handy, but you will want to wear away the right side of the structure before you hop down to collect it, or you may find yourself stuck and trapped with no hope of avoiding falling into the water.

From there, leap over to another single block followed by a short platform of them, and jump over to the floating platform. When you stand on it, this platform will automatically float to the right. You will come upon another slightly higher floating platform. Jumping up to that platform is optional, but if you remain on the bottom, you'll have to get a running start to jump up to the next ledge. Watch out for bats as you float to the right, try to shoot them away with your pistol. When you reach the ledge, a humanoid creature will refuse to let you pass. Bring up the menu and select C-3PO, your language expert. He will convince the humanoid to let you pass.

This next section can be a little confusing, as there are a couple of means of breaking into the Ice Fortress. As you can see by the map, there are a few shafts of ice which lead down to the bottom level of the fortress, and you can work your way up from there. However, this method is dangerous and the drops in the shafts are typically lined with spikes. Alternatively, you can travel all the way to the right to access the main entrance, which of course has its own perils.

As you walk to the right from the start, you'll encounter two bats. Then you will find a pit covered with disintegrating blocks. You can either break the blocks and fall down through the pit, or proceed ahead on the other side of the pit. The walkthrough will split here and you can choose which method to follow. 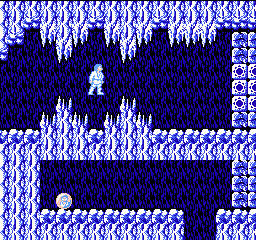 If you decide to fall down the shaft be sure to position Luke just left of center. You'll need to land over the left set of crumbling blocks over a bed of spikes. When you land, immediately jump to the left set and up to the ledge to the next room. You'll see another pistol capsule. Whether you need it or not, jump up to the top of the disintegrating blocks, and wear the right side down until you can safely jump to the next set of blocks to the right. You will find it easier to cross these blocks and jump to the next ledge than having to walk along the floor and avoid fire. You'll see an extra life capsule that you won't be able to reach (yet) and two sets of spike-lined gaps. No matter how talented you are, no amount of jumping will get you safely through these spikes, you will be forced to use Force Levitate to carefully guide Link through. Then blast your way through the Force blocks. When you are on the other side, you have a choice; you can continue to the right and try to drop through the blocks, avoiding the spikes below to reach the lower level of the fortress (you can also go further right, but it leads to a dead-end), or you can break through the blocks on the floor to your left. The second option is safer and it will enable you to collect the extra life. Blast through the blocks and drop into the hole. You'll see a long ladder. If you climb back out of it and jump over to the left, the screen will scroll into view just enough for you to collect the extra life. However, do not jump back into the hole until you've moved the screen as far to the right as it will go before stopping. If you jump into the hole before then, it counts as a death. You must move the screen until it stops scrolling to return to the ladder. Climb all the way down and proceed to the right, and jump across the bed of spikes. You will find yourself in a corridor filled with Stormtroopers. Blast them away and continue to the right. Note that this is a one-way trip, you can't return to the left once you've gone far enough. Enter the next room, jump onto the left block and use it to catapult yourself over the next block and the spikes below. Continue to the right, take out the Stormtrooper in the tunnel, proceed to the next room. You'll have to avoid the fires while leaping up the platforms to the room above. At this point, jump down to the "Challenging Darth Vader" section. 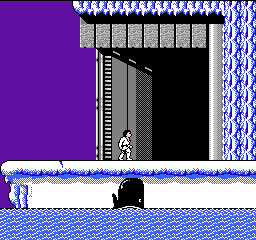 Hop over the pit, and watch out for another flying manta ray and a single turret on the ground. You will now cross a very long uninterrupted stretch of snow, when suddenly a Stormtrooper in a rocket pack will appear, firing his gun at you. Take it out as quickly as possible and continue. You will reach an ice dome with a scorpion falling down the left side. The breakable blocks are only for people who drop down the first shaft and attempt to fly out of the second. The dome can't be entered from the outside. The ledge will come to a stop and you will see a whale off in the distance. Once again, call upon your language expert C-3PO to see if he can convince the whale to give you a life. If you use C-3PO, the (rather small) whale will be waiting for you to jump on his back, and he will shuttle you to the proper entrance of the ice fortress. Once inside, you must jump over three fires. The are falling spikes on the ceiling that drop as you attempt to cross the blocks. However, you can really fall down to the room below at any time, preferably towards the middle of the room. When you land, quickly get a running start to the left and jump up to the platform which leads to the door on the left. In the next room, ignore the extra life capsule as it is more trouble than it's worth, and you need to save your Force crystals for later. Take out the hopping creature and cross to the left. In the next room, fall down to the room below (watching out for the bat), and drop down between the blocks, avoiding the turret fire. Fall down to the next room and destroy the creature waiting for you there. Get another running start and jump up to the right door. Try to jump from the high ledge to the small block below, and then launch up and over the manta ray to reach the door on the right.

You should now be in a room with two horizontally floating platforms. Before you continue, you should do your best to ensure that you have around 99 Force crystals. If you don't, visit the room to the left and attack the Manta Ray for more crystals. When you're ready, jump on the bottom platform. In order to reach the top one, you'll need to get a bit of a running start so that you jump higher. From the top platform, jump up to the ladder above. You will be standing to the left of a narrow gap with spikes above and below. You will have to activate Force Levitate to squeeze through the gap and make it to the door on the left, where you will find a Darth Vader clone. Once again, this isn't a real Vader, as one hit will turn it into yeti-like Wampa. This can be a tough battle until you figure out the Wampa's pattern. After running a short distance, it leaps forward. You can actually squat down beneath the Wampa's jump and then stand up to strike it when it lands. Then reposition yourself for the next jump and prepare to hit it when it lands again. Strike the Wampa four times and it will be destroyed, leaving a large Force crystal behind. Pick it up because you're going to need it in order to activate Force Levitate again and get back across the spikes outside of the room. 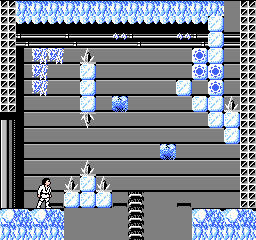 If you don't have over 60 crystals at this point but at least one more extra life, the best thing to do is get killed on the spikes so that you reappear on the other side. Then you can make the jumps from the bottom to the two single blocks and over to the Force blocks that you must destroy in order to gain access to the top. If you do have over 60 crystals, simply use Force Levitate to squeeze through the spikes and reach the blocks. Once you are through, activate Force Levitate again and fly up the right side of the room as well as the room above. You should have just enough time to reach the ladder in the highest room, and the door to the right will open. Climb up the ladder and head to the right, where you will find Chewbacca frozen in ice. Break the Force blocks that trap him inside and rescue him. In his gratitude, he will kiss you…

Back on the Millennium Falcom, you will receive a distress call from Han Solo claiming that the rebel base is under attack (so that's where he's been hanging out the whole time…). With the empire catching on to you, you will have to blast your way through thirteen enemy fighters in order to safely reach Yavin where the base is located.