Yavin has no fortress or building to explore, but it is broken up into a couple of different horizontally scrolling and vertically scrolling sequences. 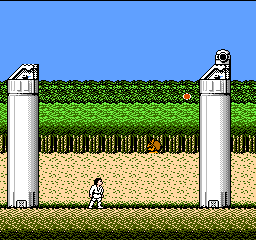 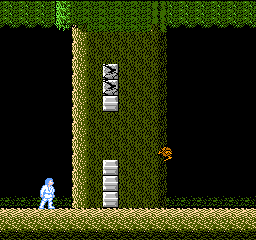 Fire will move back and forth along the ground before two walls with a small creature in between. When you reach the walls, and flying drone will appear overhead. Another small creature and a lower flying drone will appear before the next wall. A fire moves between the blocks, so jump over it to the top wall, and beyond the next two short walls, attacking the enemies in between if you like. You will come to a very big tree with a few blocks positioned on the floor and some others higher up along the trunk. Deal with the bouncing creature coming toward you before you proceed. If you continue to run right from here, you will actually loop around to the beginning of the forest. Instead, you must use the lower wall to jump up and strike the higher blocks with your light saber. They will break, revealing a door behind them. Enter through the door. 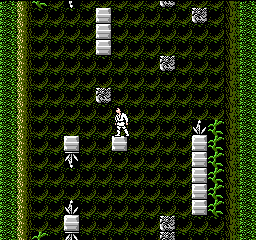 This is by far the most difficult portion of the stage. If you have saved up enough Force crystals to activate Force Levitate, it is highly recommended that you use it here. The walkthrough will assume that you cannot activate levitation. Inside the trunk, you will see a set of cracked blocks. The moment you land on these blocks, they begin to crumble, so you can't stay on them very long. You will also need a bit of a running start to make many of the jumps mentioned, so do not attempt them from a stand still. From the arrival point, jump to the brick on the right. Just as you land, jump in the air and double back around to the brick above you. Leap to the brick on your left, and up to the one above it. 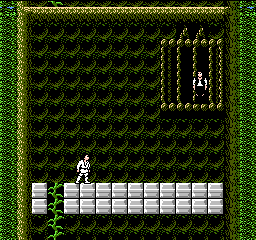 From here, you have a choice. You can either jump to the right, climb to the top of the vine, and very carefully jump through the pair of spikes to the brick on your right, or you can jump to the two blocks above and to your right, and then back to the block on the left. From there, turn around and leap to the top of the column. Once at the top, take a step to the left and leap to the block containing the pistol capsule before the top brick crumbles, or you will be unable to reach it without Force Levitate. 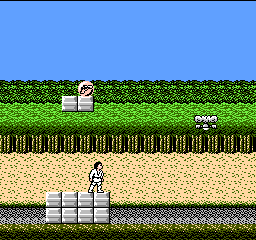 You will now be able to leave the forest and you should be armed with a pistol. The next section will see you jumping from platform to platform over terrain that you cannot land in. Start by taking out the two small creatures. As you jump from the first platform to the second, a Stormtrooper with a jetpack will fly by. Shooting him as you leap over the ground below. Be sure to get a good running start before you jump over the gaps. You will encounter a turret hanging from a small isolated block. Destroy the turret with your pistol, and then use Force Speed to launch yourself to the top of the block. Because you will have so much momentum, you can't attempt to stop before you jump to the next platform so leap immediately when you land. Ascend the tall columns, and drop down to the platform below the one containing a pistol capsule. Assuming you didn't die, you should still have the pistol, but if you did, and can attempt to reach it with speed or levitation.

Now prepare to jump aboard the hovering platforms that float up and down above the ground. When you reach the first one, jump to the second at the height of its path. From the second platform, you must activate Force Speed and jump to the top of the next wall (although it's safer to use Force Levitate and fly there). If you use speed, remember to jump immediately upon landing so that you don't slip off the wall. You should be able to leap all the way over to the safe ground beyond. Two jumping creatures will confront you in front of some trees before you begin to see a building. Both a walking and flying Stormtrooper will attack you as you walk in front of it, not once but twice. Once the scrolling stops, walk to the right side to enter the building. 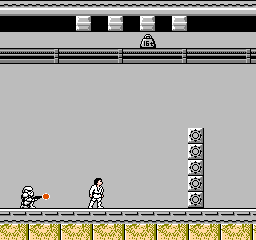 As you walk to the right, you will encounter the following sequence of enemies; a small creature, a ceiling mounted turret (you must get a running start to jump up high enough to shoot at it), a walking Stormtrooper, a flying squirrel, another ceiling mounted turret, and a Stormtrooper. When you get further inside, a small creature will hop down a staircase of blocks. Destroy it and jump to the top. You will be able to destroy three blocks blocking access to a ladder. You can destroy them and climb down to deal with a Stormtrooper, or stay above and jump over the walls with small creatures between them. Either way, when you reach the floor, be on the lookout for 16 ton weights that fall from the ceiling like traps. Stormtroopers will be appearing from behind as you proceed. Shoot through the wall of Force blocks, and watch out for the rotating fire beyond. There is one more ceiling mounted turret before you advance to the next section. 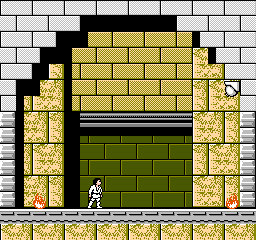 You will appear to be trapped inside the next room with two fires patrolling the floor and a ceiling mounted turret that's too high to hit firing down on you. However, if you access the menu and speak with Chewbacca, he will break the right door down for you so that you may continue. Then you will walk through an empty corridor to reach the next section which starts with a bouncing creature. Further in, you can jump up to the top blocks and try to avoid the Stormtrooper below, or you can take your chances and confront him. Either way, you must carefully tap the jump button in order to squeeze through the pair of spikes. Then hop over the two spike walls, watch out for the fire on the ground and the turret on the ceiling, and break a hole through the wall of Force blocks. 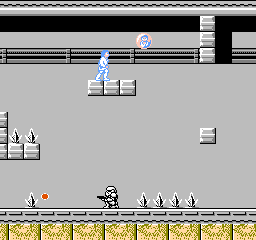 It is advantageous at this point to jump on top of the column of Force blocks, activate Force Speed, and leap to the center of the column on the spike platform off the ground to the right. When you land, immediately jump to the next platform and you will be able to collect an extra life capsule as a Stormtrooper passes harmlessly beneath you. If you land in front of a bed of four spikes, you will also need to activate Force Speed to reach the small block above and to the right. Once there, immediately jump to the crumbling platform beyond, and carefully squeeze between the pair of spikes to reach the floor beyond. 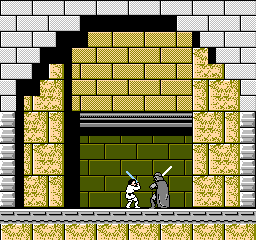 This will be the last battle between you and Darth Vader. Like your encounter in the Death Star, he is not a transforming clone but the real deal. As a result, you will have to ask Obi Wan for guidance once again after you hit him with your light saber the first time. After speaking with him, you will be able to harm him once again, but look out! This time, Darth Vader has the ability to fire beams out of his light saber, just like you. Only his travel quite fast and are difficult to predict. The best strategy to employ against him is to leap over his when he fires a beam at you, and land on the opposite side. As soon as you land, turn around, and press both buttons simultaneously so that you strike him while initiating your leap over his head at the same time. Hit him four times like this and he will go down without you having to worry about the beams.

Once you defeat him, you'll be able to exit to the right. After passing through one more corridor, you will be back outside. Princess Leia will be waiting to congratulate you and announce that it's time for the counter attack. Rather than seeing the Millennium Falcon flying away, you will now be treated to the image of an X-Wing blasting off into space. You will see your destination, the Death Star, ahead of you. Combat through space in the X-Wing is identical to combat in the Millennium Falcon, down to the three shields that you get to defend yourself. Take out 15 enemy tie fighters and you will begin the assault on the Death Star.