The Wing of Madoola | Table of Contents | Gameplay | Walkthrough 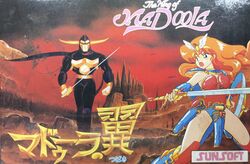 The Wing of Madoola (マドゥーラの翼, Madoola no Tsubasa) is a game for the Famicom released by SunSoft in 1986. It is a side scrolling action adventure game in which the player must progress through 16 stages, collecting items which increase the main character Lucia's power, and defeating the boss of each stage in order to gain entrance to the next stage.

This game is considered rather difficult. Although Lucia's strength and health increase throughout the game, enemies generally do large amounts of damage, and many continue to smash into Lucia for multiple consecutive hits. Some stages are very large, and it is easy to overlook some of the more necessary items that can make the completion of the game much easier. Many of the bosses can withstand a tremendous amount of damage before being defeated.

The game was never released outside of Japan. It was only ever rereleased once on a compilation disc for the PlayStation, in Memorial Series: Sunsoft Vol. 3.

Once upon a time, in the Kingdom of Badham, there was a statue of a bird known as the Wing of Madoola. Whoever possessed the wing would possess the power to rule the world, and many wars were fought between nations to obtain it.

A wise king, one of the members of the Rameru family, managed to get a hold of the wing, and ordered that a deep cave be constructed where the wings would be hidden so that the wars would cease. The knowledge of the cave would be recorded and locked away, accessible only to the rulers of the land. Peace soon returned to the world.

Several centuries later, a young member of the Rameru family known as Darutos learned of the location of the wing through the kingdom's secret archives. He betrayed the family and stole away with the Wing of Madoola. Using the power of the wing, he summoned demons to attack and take over castle Arekusu. He constructed an underground labyrinth beneath the castle, built a dangerous fortress, and planned to rule the world.

The few survivors of Arekusu's military, and the remainder of the Rameru family fled the castle. They regrouped and devised a desperate plan to overthrow Darutos and regain control of the kingdom. Lucia, a brave warrior, was selected to accompany a member of the Rameru family who was uniquely capable of wielding magic known only to his family.

As they approached Arekusu, they were beset upon by two powerful demons. While one distracted Lucia, the other attacked the Rameru family member. Lucia battled both demons and defeated them, but not before her partner received a fatal wound. Knowing what had to be done, Lucia bravely pressed forward, knowing that only she could stop Darutos, and regain possession of the Wing of Madoola.