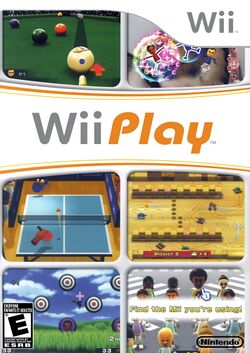 Wii Play is a game that is published & developed by Nintendo. It is a collection of fun and simple minigames aimed at players of all ages. The game is usually sold with a free Wii Remote. The ten minigames in Wii Play include Laser Hockey, Shooting Range, Billiards and Tanks!. All games use only the Wii Remote - with the exception of Tanks!, which uses both the Wii Remote and the Nunchuk extension.

The games Shooting game is supposedly thought to be a Duck Hunt reference.