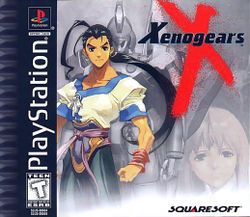 Xenogears (ゼノギアス, Zenogiasu?) was developed and published by Square for Sony's PlayStation. It was released on February 11, 1998 in Japan and on October 21, 1998 in North America. The game was never released in PAL territories. The game was recently re-released by Square Enix for the PlayStation Network on June 25, 2008 in Japan and on February 22, 2011 in North America.

Xenogears follows main character Fei Fong Wong and several others as they struggle to survive in a world torn apart by war between the nations of Aveh and Kislev. The principles and philosophies of Friedrich Nietzsche, Sigmund Freud, Carl Jung and Jacques Lacan, as well as various religious themes greatly influence the overall plot and world of Xenogears. A major theme of the game is the nature of human memory: from the start of the game, Fei suffers from memory loss, which color his interactions with other characters. In addition to the concept of memory, the struggle between man and machine is also central to the game's plot. Each of the playable characters can ride in giant mechs known as Gears and can use them in battle.