You must be above level 6 to start this region. 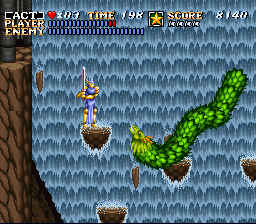 The greatest danger in this battle is falling off the small platforms.

In front of a vast waterfall you will fight the Flying Serpent. It moves quickly and erratically across the screen, disappearing off one side of the screen and sometimes reappearing on the opposite side. Occasionally it will vary its moves by swiftly flying in a straight line. The only vulnerable part of its body is its head, so just keep swinging the sword as it flies past. This is one battle where the sword can be more effective than the stardust spell, because the target is so small and it's only on the screen for a short amount of time.

Before the boss fight, there is a pickup that allows you to shoot a ranged attack from your sword that will allow you to more quickly defeat the Flying Serpent. In professional mode, this is replaced by a 1-up. 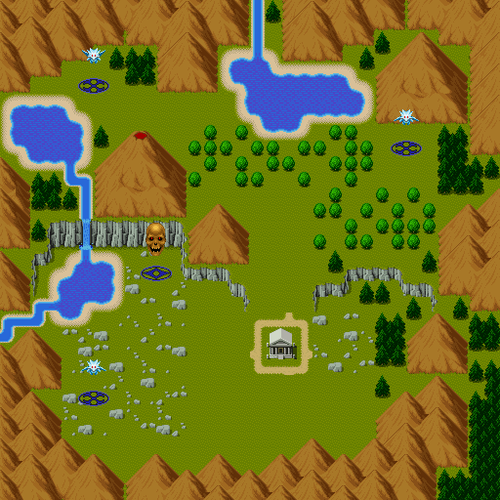 Aitos is an uncultivated plateau. To start the town, you need to use lightning on the surrounding rocks. You should quickly find the lairs to the rocks in the west; build the town towards them to seal the lair.

As you seal the first two lairs, one of the townsmen becomes injured. When the second lair is sealed, use rain on him to grant his last wish.

When the city grows large enough, they will construct a windmill. When the wind eventually stops, the windmill won't work. This is resolved by using the wind miracle.

The old dormant volcano has suddenly erupted. We can hear monster's footsteps! 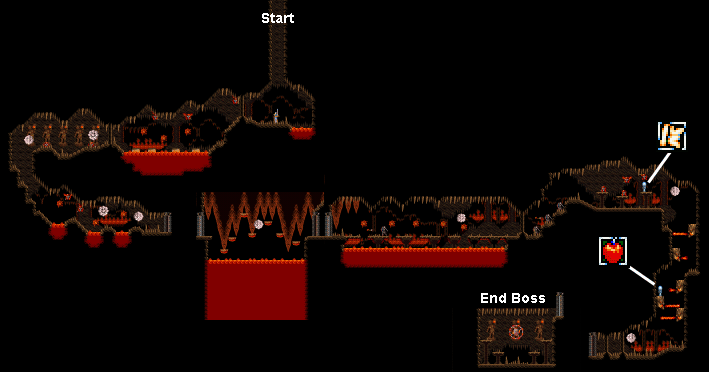 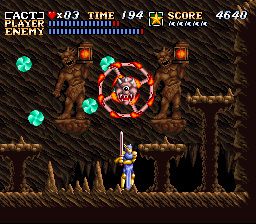 Avoiding the projectiles is tricky, but keep up the offense to win this battle.

The Flaming Wheel attacks by rolling back and forth across the screen, and occasionally it flies up to the center to shoot out five glowing projectiles. Use the platforms to jump over the wheel when it's rolling on the ground, and strike with the sword as it flies to the center of the screen. Since the player is temporarily invulnerable while casting spells, you can get in a few easy hits by staying on the ground and casting spells while it's rolling back and forth.