Mid way through the map is an odd-looking tree. You will need to hit its head to extend the platform to the second half of the map.

The Centaur only really has two attacks. The Centaur's main attack is to charge with the spear, but this is easily anticipated because before charging it will always lower the spear. When this happens, just go near the cliff on the left and kneel to avoid being hit. While kneeling this way, keep striking the centaur with the sword. It will never charge when near the cliff, and will instead use its other attack.

It may also strike with lightning bolts from its spear, but each lightning attack can easily be anticipated by the blue glow on the tip of the spear. When the lightning is about to strike, simply move to the left to avoid being struck (although you are free to ignore the damage and strike whenever possible).

Keep up the attacks and the Centaur is easily defeated.

Under professional mode, you can also run past the centaur just after it made its charging attack. If you do this, you can get a few attacks from behind before the centaur turns around. Additional swings can also be made before its next attack. While there is little need to dodge attacks under professional mode, you should still avoid contact with the main body outside of its attack. 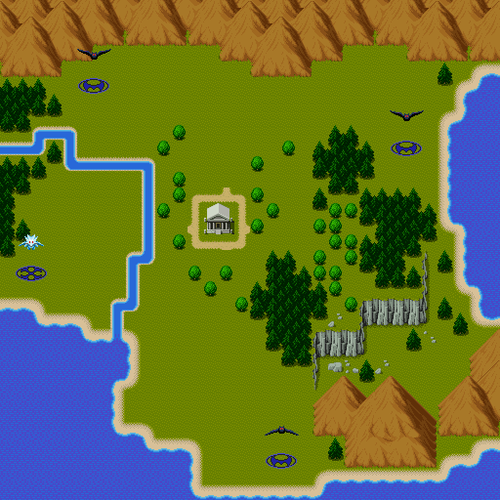 You need to seal all four monster lairs to complete this section. First, clear the bushes around the town center with the lightning miracle, then extend the city to the south to seal the southern lair of Napper bats. As it extends, your townsfolk will give you a bow that improves the strength of your angel. As the townsfolk seal the lair, you will collect a scroll of magic. You can use lightning on the rock to the north east of the lair to retrieve fire magic.

Extend to the north east to seal the lair. You can also extend the city directly to the east then south to collect another source of magic.

Extend to the northwest. Once you reach that position, you collect a Bomb, and the ability to build bridges. The townspeople will also find an item as they start fishing.

Build across the river to the Blue Dragons lair. Once the last lair is sealed, the second act is available. 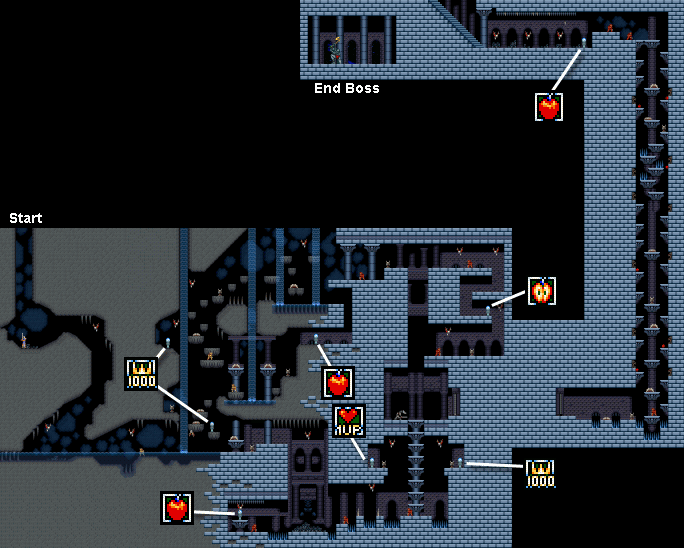 The Minotaurus will jump up and disappear off the top of the screen, and then fall back down and attempt to land on the player. After landing, it swings its axe, which sends a ghostly axe flying across the screen. To avoid being hit, keep moving. Walk left or right while the Minotaurus is off the screen, and then when it lands be sure to keep your distance to avoid its long reach. The flying axe can be avoided by jumping towards the Minotaurus, which will also bring you within striking range. Get a couple of hits in before it jumps again, and then repeat the process. Also remember that using the newly acquired Fire spell will make the player invulnerable while casting, so its good for a couple free hits on the boss.

Under professional mode, the tactic is the same, but you do not have access to the fire spell. Run quickly to the left or right when it is offscreen, and land as many strikes as possible when it is on the ground.