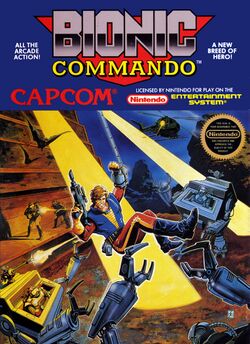 The plot of the original Japanese release revolved around an attempt on the part of neo-Nazis to revive Hitler. For the release of the international version of the game, all references to Nazism in text and imagery were removed. The Nazis were referred to as the "Badds" (though the back-story in the American version's manual referred to them as the "Nazz"), the Imperial Army's Swastika insignia was changed into a new one resembling an eagle, and the leader of the villains, originally called Weizmann in the Japanese version, was renamed Killt. In addition to graphical changes, the difficulty of the game was rebalanced and some of the areas were made less difficult.

In the game, the player has to explore each stage and obtain the necessary equipment to progress. The protagonist is Ladd Spencer, a commando equipped with a bionic arm featuring a grappling gun, allowing the protagonist to pull himself forward or swing from the ceiling. As such, the series is one of few instances of a platform game in which the player cannot jump. To cross gaps or climb ledges, the hero must use his bionic arm.