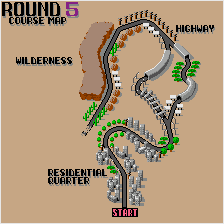 As mentioned on the two previous pages, the (initially-unknown) target car of this stage has a slight speed advantage over Gibson and Broady's Porsche once they catch up with it, so it's once again advisable to only expend a use of the Turbo Activator if it is absolutely necessary before they have done so; the amount of points you receive for each time you manage to ram into the back of this once-again-slightly-faster one has also been increased to 50000.

However, in the US version (which shows the Porsche's speed in miles, as opposed to kilometres), the copyright notice says "© 1988 TAITO AMERICA CORPORATION", and in the World version, it says "© 1988 TAITO CORPORATION JAPAN"; after the credits have finished, the game will go into high-score mode as its high-score theme starts to be heard from the Yamaha YM-2610. Your score will most likely be the highest one on the cabinet to date, so you should enter your initials at the top of the table with pride by turning the steering wheel left and right to select the letters, then pressing the Turbo Activator switch to confirm them - and once you do so, the game shall go back into attract mode. Gibson and Broady shall return for Crime City in 1989.