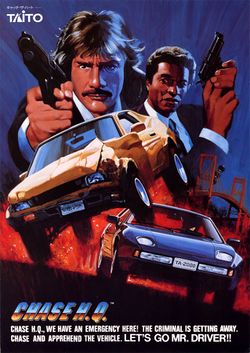 Chase H.Q. is a racing arcade game that was released by Taito Corporation in 1988; it runs upon the company's Z-System hardware and was later ported to several different types of systems (it was also included in the compilation games Chase H.Q. Plus S.C.I. for the Sega Saturn, Taito Variety Pack for the Game Boy and Taito Memories II Gekan for the Sony PlayStation 2). Both the PC Engine and the Game Boy conversions were also released under the name of Taito Chase H.Q., and the Game Boy Color one was released under the names of Taito Memorial - Chase H.Q. in Japan and Chase H.Q. - Secret Police in the US - and the PC Engine one was also released on Wii Virtual Console in 2008.

The player has to help two undercover policemen, named Tony Gibson and Raymond Broady (also known as Mr. Driver) catch up with several criminals' cars in their black custom Porsche (the controls for which are a steering wheel, a gas pedal, a break pedal, and a gear shifter with a "Turbo" activator that can be used three times per stage) within a minute, then ram them until they are too damaged to keep going within another minute; as with Sega's Out Run (1986), all stages feature forked junctions, and the player must choose which route to take but they are just temporary diversions and determine how quickly the criminals' cars are caught up with. When the gear shifter's Turbo activator is pushed, it shall accelerate Gibson and Broady's Porsche to incredible speeds for a few seconds - and it must be used wisely if the player wishes to have a chance of catching a criminal before the timer runs out.