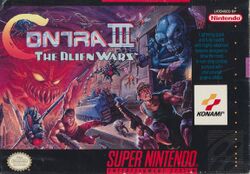 Contra III: The Alien Wars is the second console sequel to Contra. The Contra commandos are sent to the front lines once again to stop a third alien invasion. In Japan it was named Contra Spirits, but everything else was the same. As with the previous games, for the European release, the characters were replaced with robots and the game was renamed Super Probotector: Alien Rebels.

In 1994 the game was ported to the Game Boy (the overhead levels were redesigned since the Game Boy could not handle the rotation effects) as Contra: The Alien Wars in the US and Contra Spirits (the same name as the SNES version) in Japan.

In 2002 it was ported again, this time to the Game Boy Advance and released as Contra Advance: The Alien Wars EX in the US, Contra: Hard Spirits in Japan, and Contra Advance in Europe. Overhead levels were replaced with levels from Contra: Hard Corps without modification, causing abrupt changes in graphical quality and artistic style.

Story from the Contra Spirits manual (translated from the Japanese version):

The year is 2636. The aliens that lost in battle to the Contras have once again regained their full strength and have begun a large-scale invasion. Humans are nothing but mere rag dolls in the face of their overwhelming resources, scientific capability and powerful life force.

Half a year later, two men, Bill and Lance of the Contra team, history's greatest mercenaries, arrive to the devastated city controlled by the aliens.

A heated battle begins once more.

Story from the Contra III manual (US version):

February 14, 2636. You are about to learn what it takes to be a descendant of commando legends Scorpion and Mad Dog. That is, now that Red Falcon would like to use your family tree as a toothpick. You're Jimbo and Sully, special forces comrades just like your fearsome forefathers were. Nowadays, your weapons are far more advanced than they were when your ancestors saved the world from being skewered on Red Falcon's fangs.

That brutal beast is still in his prime and has had plenty of time to plot his revenge. He had swamped Neo City with six stages of the most cruel and unusual punishments ever. So run, climb, ride, soar and start blasting your way to the alien main base. Before your family name and your planet are just dirt under Red Falcon's claws.

Note: The identities of the main characters were changed from Bill and Lance, the heroes from the previous games, to their "descendants" Jimbo and Sully, due to plot changes in the North American localizations of the NES and Game Boy games.