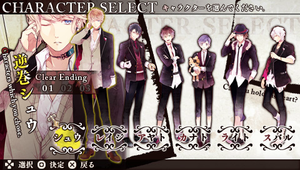 The game begins with Yui selecting one of the vampires instead of interacting with them simultaneously until it branches off into specific routes, like most visual novels. Because of this set-up, the only scene which is repeated throughout each character's route is the prologue. Otherwise, there are a total of 30 unique chapters for each character, with these 30 being split into three groups: Dark, followed by Maniac, and finally Ecstasy. An additional three chapters, known as "Heaven" scenarios, act as epilogues to the main story and can only be unlocked when all correct choices are selected. Chapters up to 7 in each group have only one correct choice. Chapters 7 and onward feature two choices that work toward unlocking different endings. End 01 can only be unlocked when all masochistic choices (indicated by an M) are selected, and End 02 is unlocked by selecting all sadistic choices (indicated by an S). Unlock End 03 by mixing these choices.

The following are the characters who can be chosen. Click on their names to see their walkthroughs.