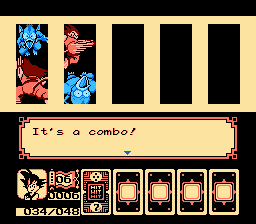 Combat between Goku and an enemy takes place throughout much of the game at various opportunities. Combat continues until either Goku or the enemy is defeated, or until one of the combatants successfully runs away. If Goku is victorious, he earns experience points for defeating an enemy. If Goku loses, the game is over and the player may continue from the most recent save.

before you can advance to the next step. You also have the opportunity to back out any or all of your selections with

.
The cards are pitted against one another
For every card that you have selected, your enemy presents a card to you. The outcome of this is determined by three aspects of the cards. See the explanation below for more information. Once all the cards have been played, the steps repeat until one of the participants has been defeated or runs away.

Power
The number of stars in the Dragon Ball at the top of the card (in green) determines the power of the card. The competitor with the higher number of stars gets to attack. If two cards with the same number of stars appear, the attacks cancel each other out. There is one single exception to the power rule; Goku may attack if he has a one star card and it is pitted against an opponent's seven star card.
Action
The square in the middle of the card (in yellow) indicates what action will be taken by the player whose card has the higher power. The possible actions are listed below.
Speed
The number presented on the bottom of the card (in blue) indicates the speed of the participant. If the speed of the defending participant is higher than the speed of the attacker, the defender may dodge the attack and escape without damage. The higher the speed is, the greater the chance of successfully dodging. Dodging an attack is not guaranteed.