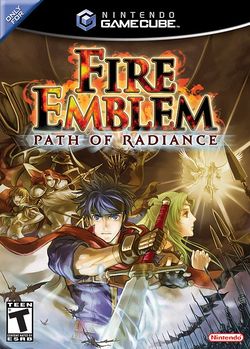 Fire Emblem: Path of Radiance (ファイアーエムブレム 蒼炎の軌跡 or Faiā Emuburemu: Sōen no Kiseki in Japanese) is a Japanese role-playing game developed by Intelligent Systems and published by Nintendo for the Nintendo GameCube. The game was released on April 20, 2005 in Japan, October 17, 2005 in North America, November 4, 2005 in Europe, and December 1, 2005 in Australia. It is the ninth game in the Fire Emblem series, the third to be released in North America, and the first to be rendered in a three-dimensional, cel-shaded manner. It is also the first to be released for a home console in North America, Australia, and Europe.