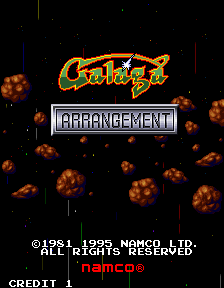 Galaga Arrangement is a fixed shooter game which was initially released by Namco as a part of the compilation arcade game Namco Classics Collection Vol. 1, in 1995; it is the seventh and final title in the Galaxian series, and the only non-laserdisc one which allows two players to play simultaneously. It was later included in the Nintendo GameCube, Sony PlayStation 2 and Microsoft Xbox versions of Namco Museum in 2002 - and its two-player mode is similar to the "regular" stages of Cosmo Gang: The Video in that both players' scores are combined and their total is shown at the top of the screen (along with the fact that lives are shared between them, so if one player is killed, the other one shall indirectly be killed as well). At the end of each stage in one-player mode, the player's number of hits and shooting-down ratio will be displayed on the screen; in two-player mode, both players' numbers of hits will be displayed with "LOSE" (for the lower one) and "WIN!" (for the higher one) below them.

Several new enemies have also been introduced, including three new types of Boss Galagas (which, if they capture one of your Fighters with their tractor beams, shall determine the type of Dual Fighter your next one will get transformed into if you manage to retrieve it); unlike Galaga '88, Dual Fighters cannot in turn be captured and retrieved to create a Triple Fighter (however, the Boss Galagas shall still attempt to capture, or only one half of if they are of a different type, a Dual Fighter by using their tractor beams). Every fifth stage (with the exception of the thirtieth one, which is a Galaga '88-styled final boss battle) is also a "Challenging Stage" - and in two-player games, the player who scores the higher number of hits is the one who shall receive the perfect 10000-point bonus at the end of them.