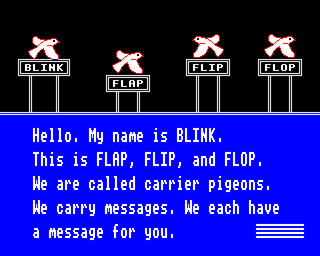 At the start of this challenge, Wordy shall appear in the top-left corner of the screen, move up and down three times and say "Your pigeon has found the pendant, ring and bracelet, and won the race! But there are still two stolen things to find. Now you must work out what they are. BLINK will help you."; at this point, when you press Space to continue, the top of the screen shall turn black as four signs with the words "BLINK", "FLAP", "FLIP" and "FLOP" appear on it, and four identical white carrier pigeons fly into view from its left and right sides and land on them (as these words are, in fact, their names): 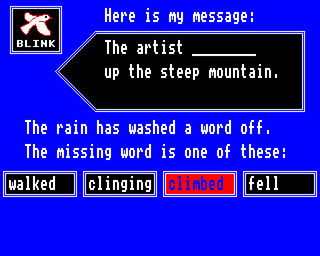 Once you've pressed Space to continue for a second time, the top half of the screen will turn blue again as Blink gives you his message; the missing word is the one highlighted in the above screenshot, and once you have chosen it he shall say "Yes, that's it! Your turn, Flap.". Once you have pressed Space to continue, Flap will give you his message - and the missing words for it and the other two are, again, those highlighted in the images below:

Once you have chosen the right words, Flap, Flip and Flop will say "Yes, that's it! Over to you, Flip./You next, Flop./Back to you, Blink.", and you will also have to press Space to continue each time; Blink will then say: "There were clues in the messages about the two stolen things. Now for the last clue.". Once you've pressed Space to continue for a seventh time, he shall say "Here is a poem. Beastly Baz has mixed up the words. You have to sort them out." - and once you have pressed Space to continue for an eighth time, he will give you the poem (to sort the words out, you have to use Space to choose a word and Enter to move it to the empty box, but the one in the top-right corner of the screen is just a spare to move the first picked word to): 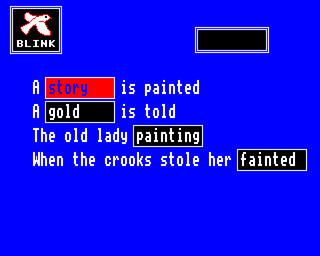