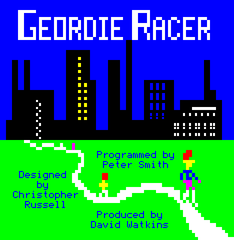 Once you've inserted the disk of BBC Enterprises's Longman Logotron-developed 1987 educational game Geordie Racer into the disk drive of your BBC Micro (it shall run on the Model B, Model B+ and Master 128), you will have to press Shift and Break together to load the program into the console; once you have done so, the Look and Read logo shall appear on the screen as the two pupils in its Os look left and right. The game will then proceed to its title screen shown above as an 8-bit version of the serial's theme song, Flying Free, Flying High, is heard - and once it has finished, the text of "Have you played before? (Press Y or N)" shall appear at the bottom of it. For the full effect, you'll have to press N for "no"; once you've done so, the screen shall turn blue, as the show's mascot Wordy appears on its left side, then moves up and down thrice. The following text shall then appear on the screen:

Once you have pressed Space to continue, Wordy will tell you "If you need help at any time, just press the ESCAPE key. Try it now."; once you have pressed Esc, he will say "Good, I can help with the Problems you will meet in this adventure. If you get stuck, or don't know what to do, just press the ESCAPE key and I'll pop up." Once you have pushed Space again, Wordy will say "When you have a choice, use the SPACE bar to choose, and the RETURN key to confirm your choice. Try it now." as two options, "Move Wordy" and "Hide Wordy", appear below him - and if you choose the former, he will move down and up three times, but if you choose the latter, he will disappear, but reappear after a few seconds. After choosing either option, a third one, "Continue", will appear; once you have chosen this option, Wordy will move up and down thrice more, and say "Good. You start with a pigeon race and later you have to run a race yourself." followed by "You also have to catch a crook called Baz." as Baz appears below him, jumps up four times and runs off the right side of the screen, and "First choose your pigeon.". Once you have pressed Space, the game shall proceed onto its first challenge - and if you do press Y for "yes" on the title screen, you can still see this introduction by going to Part 1, followed by "Wordy tells you about the game".

[Go to top]← Getting Started | Walkthrough | Choose and feed your pigeon →