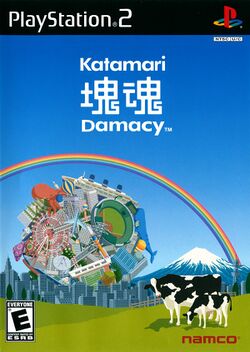 Katamari Damacy (塊魂) has you controlling the Prince of the Universe. Your father has destroyed all the stars in the sky and you have to get things back to normal by rolling gigantic balls to replace them. You start off with a ball of a certain size, and there is a target size that must be reached in a time limit. Special levels have different objectives, like collecting a number of a certain object or collecting the largest of a certain object.