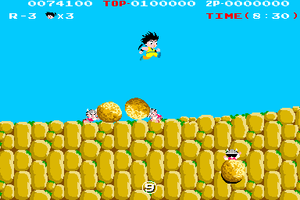 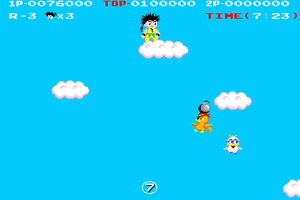 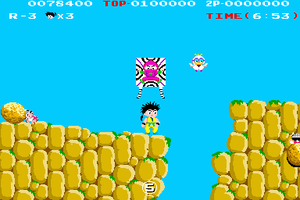 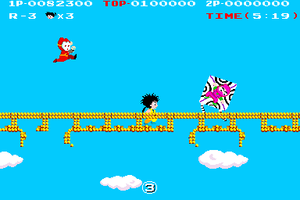 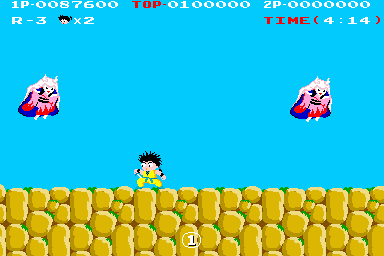 The Horned Witch is considerably easier than the previous two bosses, although you should not let your guard down. She is only vulnerable from the front; her cape shields her back from any attack. When she is struck in the front with your sword, she actually divides into two smaller witches. These two smaller witches will once again divide into two even smaller witches who will disappear when attacked. As the witch or witches bounce back and forth, their favorite attack is to send arrows downward to the floor. Watch out as they leap across the screen, and try to position yourself where they are about to land. While it is difficult to trap the witch during the first division, it is actually easy to make short work of the smaller witch and the two pieces she becomes by rapidly swinging your sword. The small witch will turn into a puff of smoke and divide, and you will kill the two resulting pieces if you are still attacking. Do this with both small witches and you will quickly defeat the boss and collect the scroll. 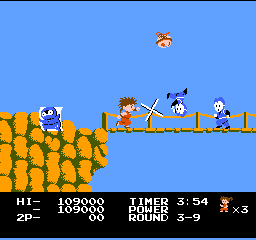 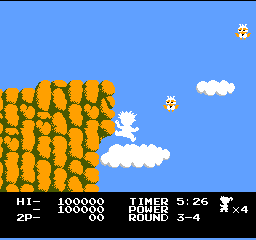 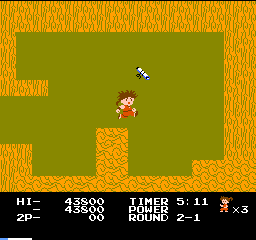 3-4: When you reach the very edge of the first cliff, before the cloud hopping portion begins, fall off the edge of the cliff, jump up and down on the cloud below, jiggle the control pad left and right (air closer to the cliff edge) and swing your sword. If you hit the right place, you will be transported to a room much like the first secret of the second stage. Swing your sword in the spaces of the empty room to make scrolls appear. These scrolls will break open and coins will appear. Collect the coins from as many scrolls as you can find, and exit the room. 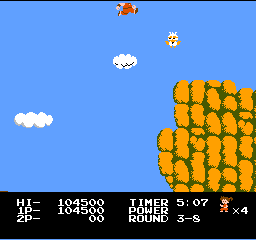 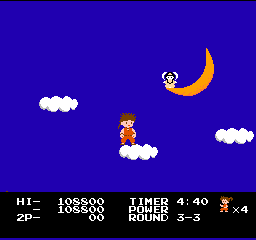 3-8: After the plateau, jump over to the bobbing cloud (be sure to take out the kite ninja that appears here). When the cloud is at the peak of its motion, jump up so that your head disappears off the top of the screen. Do this three times and you will be transported to a cloud area where you must dodge eye-patch birds and kite ninjas as you jump from cloud to cloud. If you make it all the way to the end without falling or getting killed, a princess doll will be waiting for you on the tip of the moon. Collect it to endure one extra hit throughout the rest of the stage. When you drop through the bottom, you will start at 3-10, thereby missing the gold bell.