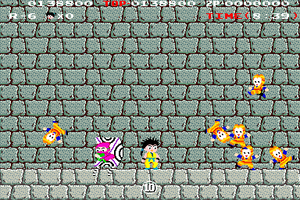 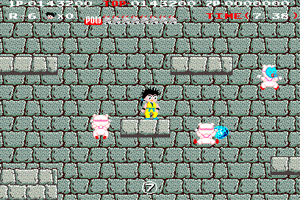 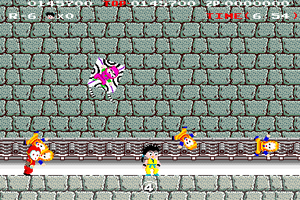 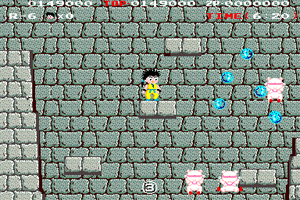 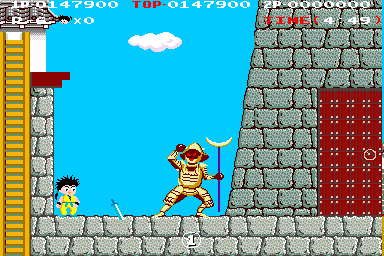 The Samurai Guard is quite robotic, and actually very non-threatening. It will approach you until it gets close enough to you, and then it will swing its spear up and down. It will never actually attempt to harm you unless you walk into it. Anytime you hit it, however, both your weapon and the guard's weapon will be dislodged, and you will both be forced to recollect them. The trick is to hit the guard in a location where you will have faster access to your weapon than the guard. That location is along the left wall in front of the ladder. If you lure the guard all the way over, and attack him, your sword won't go nearly that far, and you will be able to grab it and attack the guard before it can fully recover. The guard's vulnerable point is its head. All you must do is collect your sword, run up to hit, jump up and hit it in the head before he recovers his stance. Hit him three times to defeat him. It may take some practice to get right, but you do not have to fear getting attacked by the guard as long as you keep a healthy distance. 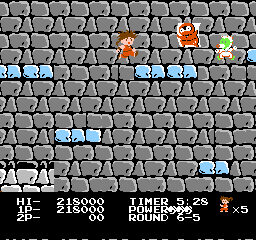 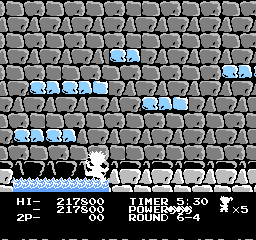 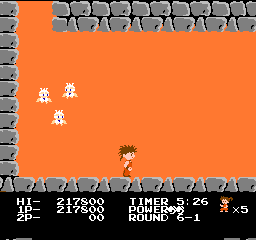 6-4: After using the platforms to cross two pools of water, come back to the left and fall over the right edge of the second pool. You will be transported to a tunnel that contains flocks of watch birds which bounce around the edges of the tunnel. They can be attacked, but when one remains, it will fly about much faster and become harder to dodge. A Princess doll can be collected at the end of the tunnel before the ladder, which leads back up to the stage and deposits you at 6-7.