The player controls Mick or Mack during his mission to retrieve Ronald McDonald's magic bag from the evil Hamburglar. It is possible to choose the character at the beginning of the game and also during the adventure it is possible to change it, but the moves available are still the same. A 2-player mode is also available.

The player must venture through six different worlds in the McDonaldland universe, each of which has a certain number of levels. You can move around the world map using the directional buttons. To access a level, go to the relevant icon and then press button A. The world map also shows a lot of information: 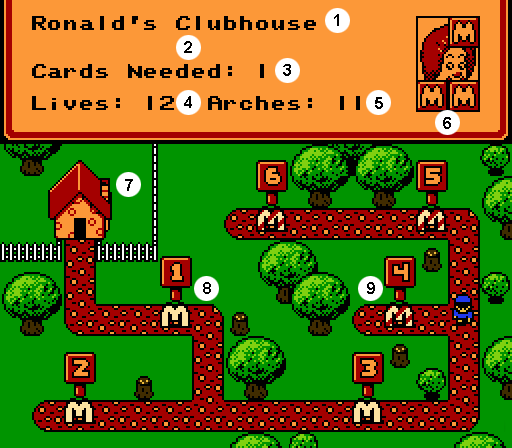 In each level, the player must advance, avoiding the enemies he encounters along the way and overcoming various obstacles. He can eliminate enemies he encounters by picking up and throwing appropriate blocks at them (see Items section). At the beginning of the game you have 4 lives available and the character's energy is represented by the hearts in the top left of the screen. Whenever the player comes in contact with an enemy, he loses a heart of energy. If he loses all hearts, he loses a life and has to start the level over from the beginning. Losing all lives is game over. In addition, a life is immediately lost by falling off a precipice, ending up at the bottom of lakes or being bitten by the fearsome Gnash fish. It is however possible to restore your hearts of energy by defeating enemies: on the tenth enemy killed, a heart is restored. By also making a super-hit, killing two enemies with the same block, you will earn a heart. The maximum number of hearts you can have is 4. In the levels there are also many elements that help the player in his mission. In addition to blocks to throw at enemies, there are McDonald's arches that allow you to access bonus levels, extra lives to collect, trampolines that allow you to jump higher and many more. There are also special zippers, which allow you to move to another area of the level or to access bonus areas. 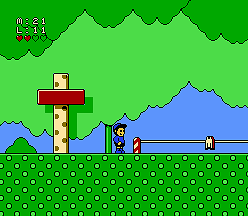 Jump as far right on the finish line as possible and also take the Golden Arch for a bonus.

The goal of each level is not simply to reach the finish line. In order to progress through the game, you also need to find special cards. The protagonist of each world will in fact ask you to find a certain number of cards in his personal puzzle (an image made up of six cards); only after you have found enough of them will he let you advance into the next world. To do this, you'll need to go back to his house on the world map and talk to him. The cards are located in the various levels and it is therefore necessary to look for them. Among other things, not all the cards of a certain character are found in his world, but they could also be in other worlds, so you need to search the levels well. In addition to the cards of the six characters, there are also some secret cards, the most difficult to collect. Finding all six of them, you can unlock a seventh bonus world, Puzzleworld (see the appropriate section). In each level there may be one or more cards, but only after crossing the finish line will you know the puzzle of which character they belong to. There are 42 cards in all to be found.

Each time you collect 100 McDonald's arches, at the end of the level you will be taken to a bonus area, where you will have to face a mini-game. In front of you are four elevators suspended in the void. Every few seconds, an arrow pointing up or down will appear on each elevator. There are always three arrows pointing down and one pointing up. A moment later, the elevator you are on will move for a short distance up or down, depending on the case, while the others will remain motionless. You will therefore have to be quick to jump and try to always find yourself on the rising block, without falling to the bottom. This will take you to the top of the room, where you can choose between two zippers. Each of them will take you to a special area, where you will have the chance to earn up to 5 extra lives!

If, on the other hand, you fail and fall to the bottom, as a consolation prize, you will only have the possibility to change character.