Three weeks after your failed mission to protect Prime Minister N'mani, you are dispatched to an area just outside Sukhumi, the capital of Abkhazia. Here, your mission is to rein in Andrey Dolzaev, a wanted terrorist who is attempting to instigate a coup d'état in the disputed region. During the opening cutscene, Doktor will inform you of a new procedure required to maintain your new cybernetically-enhanced body (in other words, recover lost health): cutting enemies open and removing their repair cells. He will also request that you bring him any left arms you recover. Upon landing, you will notice a new energy bar underneath your life bar: this is your Fuel Cell gauge. Your Fuel Cells must be full to enter the newly-enhanced Blade Mode, which slows down time by 50%, allowing you to carve up enemies more precisely. If the Fuel Cell gauge is not full, you will enter regular Blade Mode, which lacks the slowed-time effect. Fuel Cells are replenished by performing regular attacks on enemies. You also now gain access to the Codec (press

), which allows you to contact Boris for mission information, Kevin for information on your current location, Courtney to save your game, or Doktor for information on cyborgs and cybernetics. You can also customise Raiden's body, or play the VR missions and tutorials. 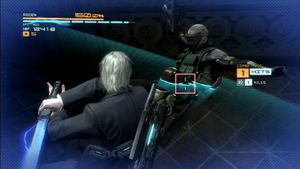 Align the light-blue aiming line with the red boxes, and cut, to perform Zandatsu.

From the starting location, go right and up the staircase. At the top, you will be ambushed by three stealth-camouflaged cyborgs. This battle offers you an opportunity to test out your new Blade Mode in battle. Fight and parry attacks, and when the screen flashes blue, press and hold

to enter Blade Mode. The game will slow down, and you will notice red boxes appear on your enemies. These mark the most optimal places to cut them. Align your blade with the red boxes, and attack to slice the enemy open. If you cut in the marked location, you will be prompted by the kanji 奪 (, datsu?, "take"), and a button prompt on the screen, to press

- do this to strip the enemy of their repair cells, and use them to replenish your own health and fuel cells. This technique is known as Zandatsu (斬奪, Zandatsu?) (meaning "slash and take"), and its usage is vital to survival in this game. Finish off the enemies here to progress - you can use them to practice your new skill, or just chop them up as usual. Watch out for the one at the back, who will throw out a grenade at the start of the battle - it will be outlined in red, so avoid it before attacking yourself. 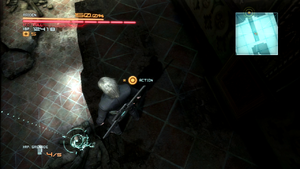 Aim for the enemy below, and attack with the displayed button, to perform a Ninja Kill. 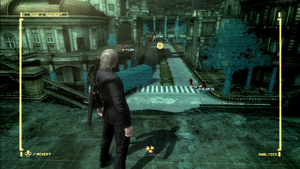 Use Augment Mode to pinpoint hostiles. 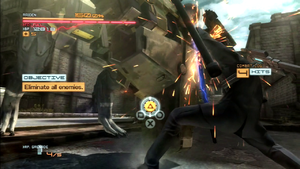 Parry the Gekko's charging attack, to get the perfect counter-attack opportunity.

After finishing the cyborgs, head into the building ahead. Boris will call you, and tell you to head for the old city. Use Ninja Run to climb the stack of cargo boxes up to the top floor, and head out the back. Don't just jump down here - stick to the right side of this floor, and walk up to just above the cyborg on the lower floor. When you're close enough, you'll be prompted to press

- do so to perform a new technique known as Ninja Kill, in which Raiden jumps down on, or kills from behind, an enemy who has not noticed his presence (in other words, this won't work in Alert Phase). When the screen flashes blue, you can press and hold

to use Zandatsu on him. Leave the building.

Outside, Boris will call and tell you to take the main thoroughfare ahead of you, and tells you to use Augment Mode to detect the enemies' locations. Press

to activate Augment Mode, which marks out the locations of enemies and their distances from you. Go left and use Ninja Run to jump the gap in the bridge. Sneak up behind the enemy and use Ninja Kill when prompted. Use Ninja Run to climb up the cargo boxes and onto the roof of the building. Cross the bridge, and wait by the hole for the enemy to pass underneath, then Ninja Kill him. Move forwards to the waypoint marked on the radar, where you're greeted by a Gekko - essentially a slightly weaker form of Metal Gear. You'll also face a number of enemy cyborgs, though the Gekko is your main foe. Zandatsu the cyborgs to regain health. Be wary of the Gekko's grapple attack - it flashes yellow before attempting this, giving you time to avoid it. If it does get you, rotate

to break free. Parry its kicking attacks. Watch out particularly for the Gekko's charging attack, where it will try to ram you head-first. If you parry it successfully, mash

and it will get dazed, in which case you'll be prompted to hit

together, which will cut up both its legs, allowing you to jump underneath and enter Blade Mode when prompted to Zandatsu it. Finish off the cyborgs.

Head up the small staircase to the right, and cross the bridge. Along the way you'll pick up a rocket launcher. Press

to enter the equipment menu, and equip it in the sub-weapon section. Hold

to fire. If you want, you can use this to blow up the Gekko in the area ahead, but you'll give away your location to the enemy, and you might not even kill the Gekko. If you don't want to risk it, continue across the bridge, and wait for the Gekko to start moving away from you. Ninja Kill the cyborgs posted along the balcony, and Ninja Run down the staircase when the Gekkos are not looking at you, to the red door. Press

at the area marked "Attention" to open the door. Inside, climb to the top floor, head right, and prepare for battle. 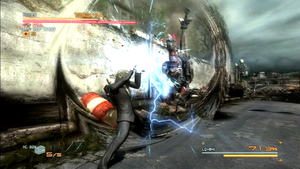 Use this battle to practice parrying. 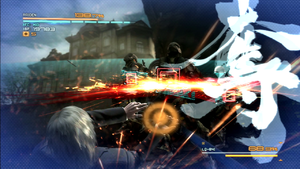 Zandatsu the reinforcements to recover health.

Blade Wolf's attacks can all be blocked by parrying (remember: tap (don't hold)

in the direction of an incoming attack while pressing

), so this battle is a good chance to practice this important technique. 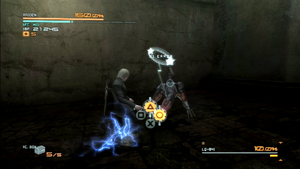 Finish the battle with the prompted buttons.

Parry its attacks to leave it open to counter-attacks. If your parrying skills are good, you can leave Blade Wolf wide open to combos of counter-attacks. When it is weakened, it will summon three cyborgs to fight you, and later a Gekko. Zandatsu them to recover your own health. Once its health is down to about 5%, you are prompted to press

, and then to activate Blade Mode, to dice it up and finish it off. 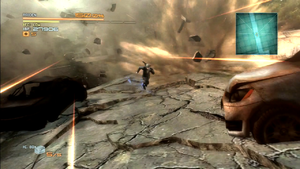 Use Ninja Run to escape the collapsing bridge. 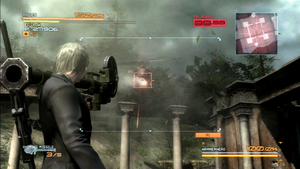 Use the provided homing missiles to shoot down the Hammerhead.

Once Blade Wolf is down, head towards the bridge just ahead. Fight off the cyborgs if you want. When you reach the bridge, it will be shot out by two incoming armed helicopters. Use Ninja Run to outrun the collapsing bridge. Mash

when you fall to save yourself, and continue running to safety. You now have to shoot down one of the helicopters. Use Ninja Run to avoid the gunfire and missiles it shoots at you, and take it down with the homing missiles found around the area. You get three homing missile launchers, which should bring it down to 25%. When prompted, press

and run at it using the missiles as stepping stones, then use Blade Mode to destroy it. Continue north. 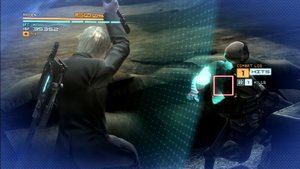 Cut off the highlighted left arm to gain access to the gate.

In this area, you'll meet a new form of flying cyborgs known as Sliders. These are more irritating than difficult, and can be killed with Zandatsu pretty easily if you jump into range. Clear out the foot soldiers, and continue towards the marked waypoint. At the end of the road is a locked gate. You need to remove the left hand of a cyborg with access, and use it to gain entry yourself. Return to the previous area, where a truckload of cyborgs is just arriving. None of these hold the key, so keep going back. There is another APC here with a commander cyborg behind it. Sneak around and Ninja Kill him, and remove the left arm in Blade Mode (aim for the arm, and press

). Return to the gate and open it via the computer to the right. If you fail, you'll have to cut it open in Blade Mode. Inside is another ambush. Wipe out all enemies, and enter the building. Ninja Run up to the top, and exit.

Run onto the top of the next building. Wait for the furthest guard to move away, and Ninja Kill the guard below. Head up the back of the building in front of you, and wait for the Gekko and the cyborg to be facing away from you. Ninja Run up behind the Gekko and Ninja Kill it, then do the same to the cyborg. Enter the ruined building ahead, and open the door. Follow the path to your left and cut the gate open. Inside is another new type of enemy, Dwarf Gekkos. These can only jump on and grapple you, requiring you to shake

to shake them off. They can be cut up pretty easily without Blade Mode. They get more annoying in the second round of the battle, when you need to contend with a group of cyborgs as well. Once all are dealt with, climb on top of the cargo boxes in the corner, and cut through the fan. 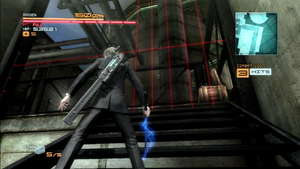 Run blidly up these stairs, and you'll trip the IR sensors.

Watch out for the security cameras in here. You can sneak up under them, and jump to cut them down. Jump down to the ground level, avoid or destroy the camera, and head up the stairs to the right. In the next area, IR sensors are in use. Ninja Run through them. Stick to the right wall, as a camera is at the end. Stop at the camera, and Ninja Run up the wall to the left of the staircase (the stairs are rigged with IR sensors). Head left. Another camera is sweeping the area here. Cut it up, and head through the door. This room is laden with cameras and IR sensors. Go left, and up along the wall, and up the stairs at the end. Another camera is at the top - destroy it, and proceed right. This area contains guards patrolling the catwalks, and a camera around the corner. You can avoid them all pretty easily, or shoot down the guards with your rocket launchers, and cut down the camera. Follow the path left to the red door, and head through. Climb the stairs to the top of the tower, and prepare for battle. 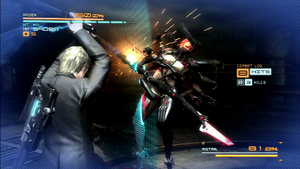 Sometimes, you can use Blade Mode to shatter Mistral's pole-arm. 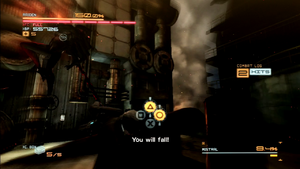 Finish her off when the button prompt appears.

You can parry most of Mistral's attacks:

You also have to contend with a group of Dwarf Gekkos on the ground. Don't kill the last one, or they will all respawn. Occasionally, after parrying an attack, you can enter Blade Mode to destroy her pole-arm. When her health is down to about 75%, you enter the second phase of the battle, where Mistral gains some attacks:

As before, these can be parried. Once she is down to 50% health, the third and final phase of the battle begins. Continue attacking until she is down to about 10% health. She will jump at you again, where you are prompted to press

together. This will cut open a tank of liquid nitrogen, which freezes Mistral. Enter Blade Mode when prompted to finish her and the chapter.